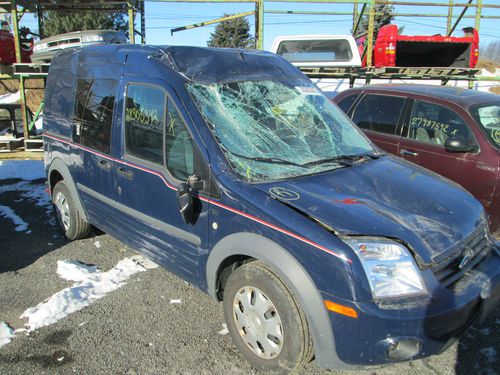 Condition: Used: A vehicle is considered used if it has been registered and issued a title. Used vehicles have had at least one previous owner. The condition of the exterior, interior and engine can vary depending on the vehicle's history. See the seller's listing for full details and description of any imperfections. ...
GREEN POINT AUTO PARTS IS ONE OF THE LARGEST AND MOST REPUTABLE SALVAGE YARDS IN THE NORTHEAST.

THIS 2010 FORD TRANSIT CONNECT XLT VAN HAS A SALVAGE TITLE, BUT RUNS AND DRIVES GREAT.  THIS VEHICLE HAS DAMAGE TO THE HOOD GRILLE, WINDSHIELD, ROOF, PASSENGERS SIDE VIEW MIRROR, AND HAS SOME MINOR COSMETIC DAMAGE (MOSTLY SCRATCHES) ON THE PASSENGERS SIDE.

THE INTERIOR OF THIS VEHICLE IS STILL IN GOOD CONDITION.  IT HAS BUCKET SEATS IN THE FRONT AND A BENCH SEAT IN THE BACK.

THIS VEHICLE DOES HAVE A SALVAGE TITLE WHICH MEANS THAT THE MANUFACTURERS WARRANTY IS VOID.