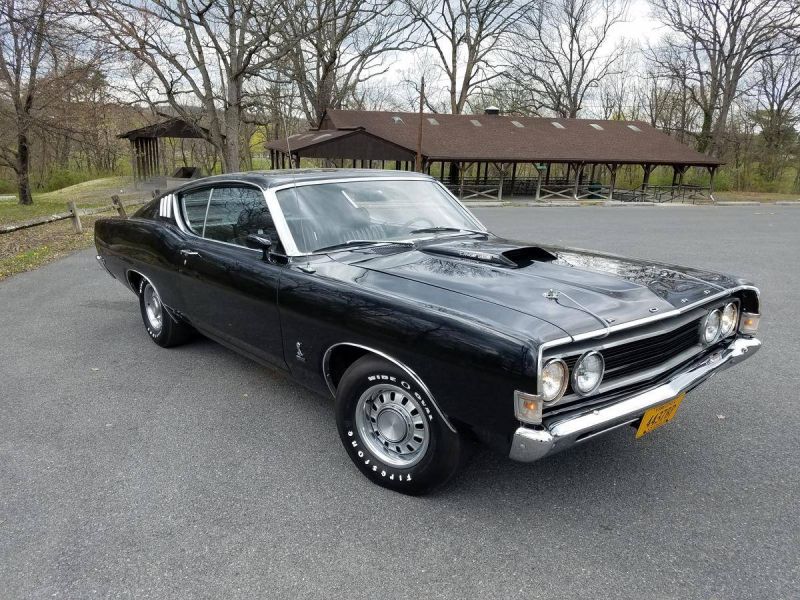 This #Matching 1 of 165 R Code Raven Black 428 7.0L Cobra-Jet looks about as nice as any street-driven Torino we have ever seen. The color, year, Sport-Roof body style, wheels, and photo staging stopped us in our tracks. This Torino could make us forget about Mustangs for a long time.

Raven Black suits this car perfectly. If it was dark green it would seem like an Bullitt car, This color is where it is at, and our standard Torque-Thrust continues. They look perfect here, and the seller even offers photos of the larger polished version and stock Rally wheels to prove our point. The wheel package shown here is original

The Black interior w/ Buckets Seats works. 4 Speed close Ratio Manual Transmission with Stock 3.50 conventional rear gears is as good as it gets especially given the size of the engine. With this powerplant we are thinking more tire smoke than winding corners. The engine is Rare with Original 428 Cobra Jet and is beautiful and so are the details on the Marti Report.

This is a fantastic looking car and one whose value isn't so silly that it can't be driven. It is worthy of shows but would also be a blast a grudge night or a long road trip. Drive it to Carlisle. Drive it to SAAC meets. Drive it on vacation. Drive it to hot rod events. The car would be a versatile talking point wherever you go...