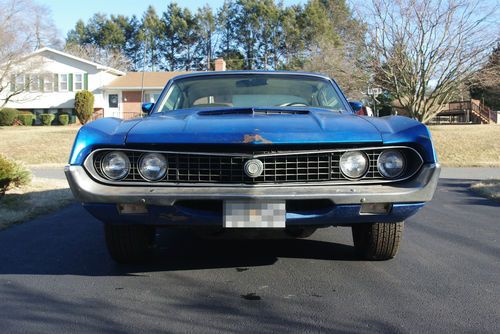 1970 Ford Torino GT Factory 351 Cleveland 4V. 3 speed FMX automatic transmission, 9" 3.00:1 rear. Factory A/C.
The Torino was purchased new by my grandparents in 1970 and has been in the family since new. It starts, runs and drives and is a good restoration project car. I always intended to restore it but never found the time so its time to let it go to someone who can take the time to restore it. The engine and transmission are original and have never been out of the car or had any major work done. The engine does blow some smoke at startup as the valve seals have deteriorated. It still has 165-175 psi compression in every cylinder and is otherwise mechanically fine. The carburetor, air cleaner and distributor have been replaced, but the original factory parts are in the trunk. It currently has a 600cfm Edelbrock performer carburetor and a Mallory electronic distributor. The belt has been removed from the factory A/C because some of the idler pulleys have seized and need to be replaced.  The transmission works perfectly and shifts firmly but it has an external leak somewhere. It recently had the fluid and filter changed and a new pan gasket put on but it still leaks a little even when sitting. I suspect it may be the selector shaft seal or the tail shaft seal. The body and interior are complete with the exception of the missing ashtray in the center console. The exterior paint color is not the original color. It was originally green with a laser stripe, but my Aunt had it painted blue sometime in the late 1970s. The white interior is original and in fair shape. The body is in fair shape considering its age but it needs new rear quarter panels and the passenger side front floor pan is rusted. There are some other rust issues noted in the pictures and quite a few little parking lot dents. It currently has the original 4 wheel manual drum brakes. I have complete V8 Granada spindles from the junkyard to convert it to front disc brakes but I never had the time to put them on. All of the V8 Granada brake parts are included in the trunk with the car and can been seen in the pictures.