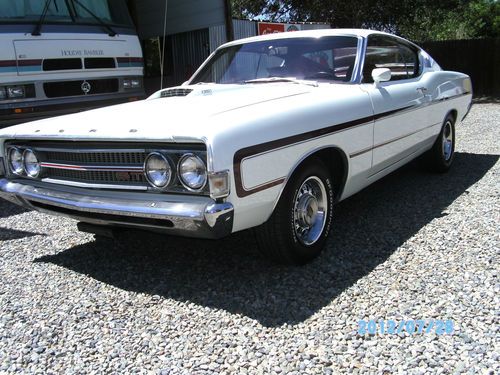 Condition: UsedA vehicle is considered used if it has been registered and issued a title. Used vehicles have had at least one previous owner. The condition of the exterior, interior and engine can vary depending on the vehicle's history. See the seller's listing for full details and description of any imperfections.Seller Notes:"Minimal wear for a car this age."

1969 Ford Torino GT, 351 Windsor, factory4 speed has been swapped for a Tremec 5 speed. 351 is the 4V high performance with power steering and power disk brakes. This is a true survivor car , having one repaint in mid 80"s, using old style single stage enamel. It has been garage kept nearly it's entire life. Driven sparingly to maintain it's factory originality. It was purchased from the Texas panhandle, a dry climate like ours in Northern New Mexico.

Paint and Interior show very well as the photo's indicate. We have chosen to leave under hood clean but not changed for it's original state. On highway trips driving the legal speed, the tremec with rear gearing of 3.00 will give you an honest 18 to 20mpg. Car has received many awards for us and the previous owners at car shows throughout the Southwest.

You will not be disappointed with this car, selling only because of recent retirement and we can't keep all the toys. Fly in drive home, any distance without a worry.

Shipping will be at buyers expense, will help with any loading at our location. Any overseas sales, car remains in our possession until all funds have cleared.