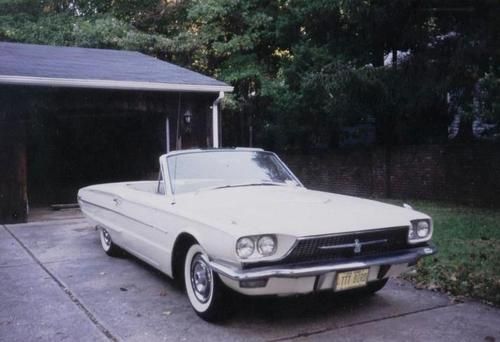 The 1966 Ford Thunderbird was the last year that the fourth generation Thunderbirds were produced. In 1966, Ford also introduced the optional 428 cid engine with 345 hp and the ability to do zero to 60 in 9 seconds!
This 1966 Thunderbird is very rare and a good investment grade collector car. It is original, solid and virtually rust free and is only one of 700 convertibles produced with the Q code engine. Only 5,049 total convertible models were produced in 1966.
I am the second owner & this car had one repaint. The engine and transmission are original and the floor pans and upholstery are original as well. The original AM radio is still in the car. The dash and instruments are in excellent condition and the instrument panel is bright. Options are power windows, power steering, power brakes and power top. The speedometer says 21,726 (It is actually 121,724 miles).
The original paint color was: "Code Z - 1915 - Sauturne Gold"
The paint color now is: "Code M - 1619 - Wimbledon White"
We purchased this car in 1972 from a Long Island Ford Dealer and drove it as a daily driver until 1980, when we re-painted it, installed a new top and mounted new WW tires. The car was taken off the road in 2002 and has been garaged since then & the engine has not been started in 3-4 years. The car has a few issues: The trunk lid is stuck in open position (as seen in last photo), the rear transmission seal has a leak, the window switch contacts have to be cleaned and the battery is dead.
The paint and chrome are shiny and the black top and white wall tires are "like new".

The car is being sold AS IS, so check it out to make sure that you are getting what you are looking for !

NOTE: The car is being sold locally as well. So should it sell locally before the end of Auction, this listing will be ended !

* Should you have any questions, please contact us prior to bidding.

* Pay with PayPal and contact us within 24 hours of auction end, notifying us of when your payment will be made.

* If you are picking up the car personally, please pay with CASH only.
* If payment is not received by us within 7 days of auction end, the Item will be re-listed, will be reported to Ebay as unpaid and you will receive a Negative Feedback!

We accept the following forms of payment:

Thank You and Good Luck bidding!