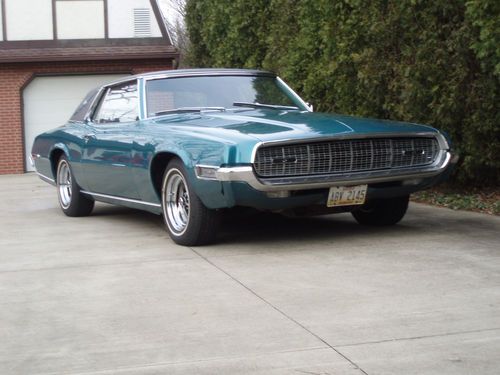 Listed for auction is one 1968 Ford Thunderbird landau coupe, 7.0 liter automatic, power steering, power brakes, the car is currently equipped with ford magnum 500 chrome 15x8 wheels and new kelly springfield 225-75R -15 tires. ( make note; If buyer wishes to have original steel wheel and original Mag style wheel covers , they can be had instead of the magnum 500's, which are also mounted with new Kelly springfield tires as well....You choose as the buyer. )  I have owned the car since 1994, it was locally purchased and kept. I purchased it from an estate. the car has original miles and never wrecked or damaged. the car was stripped and repainted in 1999, even though it has been that long the paint is still beautiful with no blemishes, it's straight , mirror finish and can be driven or used for show.  I have never detailed the engine or compartment, it has been my choice to leave it in it's original state, as the pictures show. the interior is exceptional with rips or tears, carpet is original, although the trunk carpet and fiber board panels have been replaced. i do encourage physical inspection by appointment only before bidding, although that is at the bidders discretion. I am open to questions , I have owned this car for so long that I know it completely. this is a 44 year old vehicle and there is No warranty expressed or implied, you have to understand I have describbed this vehicle to my best knowledge. My phone number is 330-337-9200 ask for Ron, Thank you for looking and Good Luck Bidding.