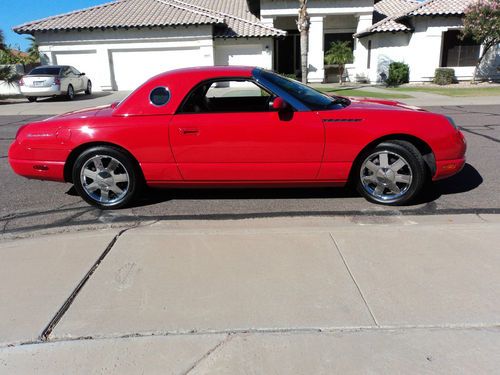 THIS IS A GARAGE KEPT 2002 FORD THUNDERBIRD WITH THE PREMIUM PACKAGE. IT HAS 57K ADULT DRIVEN MILES. ALL SERVICES HAVE BEEN DONE INCLUDING NEW TIRES. IT HAS TWO TOPS WITH THE ORIGINAL TOP HOLDER. NO ACCIDENTS! LIKE NEW CONDITION! I HAVE THE ORIGINAL WINDOW STICKER  TO THIS FUTURE COLLECTIBLE. NO DISAPPOINTMENTS! NO SALES TAX IN ARIZONA! THIS T-BIRD HAS ALWAYS BEEN A SOUTHERN CAR, NEVER EXPOSED TO SALTS AND ROAD SANDS OF NORTHERN CARS. IF YOU NEED ANY FURTHER INFORMATION PLEASE FEEL FREE TO CONTACT ME.