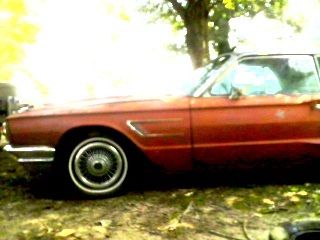 Condition: UsedA vehicle is considered used if it has been registered and issued a title. Used vehicles have had at least one previous owner. The condition of the exterior, interior and engine can vary depending on the vehicle's history. See the seller's listing for full details and description of any imperfections.Seller Notes:"this car is in great shape for its age ,been stored 20 tears in garage,blew off dust and cleaned winwows, draind gas tank ,replaced gas,batt,new ford carb,and started it rite up ,no noise in motor,put it in gear and away we went hit brakes and line broke was put in primer before stored ,1 small dent rt fender,left ouarterpanel has bondo from dent,interor no rips ,clean headliner came apart at seams but all there,power windows make noise but did not want,to force them ,special order car 9-28-64 beach ford in Norfolk va. car was load when order,need a\c comp,owners manual,shop manual,we had all codes and decoded.maybe. trade.I[ DO NOT HAVE TITLE]"

first year disc brake dual piston  ,this is a 10 year anniversary  car .this car has every options had to list clear title BUT NO TITLE , sofa pillow rear seat slide to the rt steering wheel good oil presser, am/fm