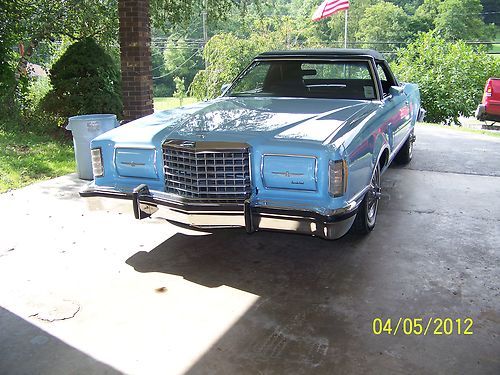 Condition: UsedA vehicle is considered used if it has been registered and issued a title. Used vehicles have had at least one previous owner. The condition of the exterior, interior and engine can vary depending on the vehicle's history. See the seller's listing for full details and description of any imperfections.Seller Notes:"It is in excellent condition other than normal wear... the top has a couple of spots but minor..."

You are bidding on a 1978 Ford Thunderbird convertible.. It is mostly original with 73000, miles and can be driven anywhere...Everything works, even the original 8 track tape player.... It has been professionally repainted and the top replaced.......The reason I am selling it is that my wife passed away and I have lost interest... There were less than 100 produced that year which makes the car rare... If you want to a car that nobody has seen. This is it!!!..Feel free to ask any questions...  Note: As with the starting price of $6500.00 this is a NO RESERVE auction... Buyer will be required to make a deposit of   $1000.00  within 48 hours after auction has ended  Thanks and happy bidding....