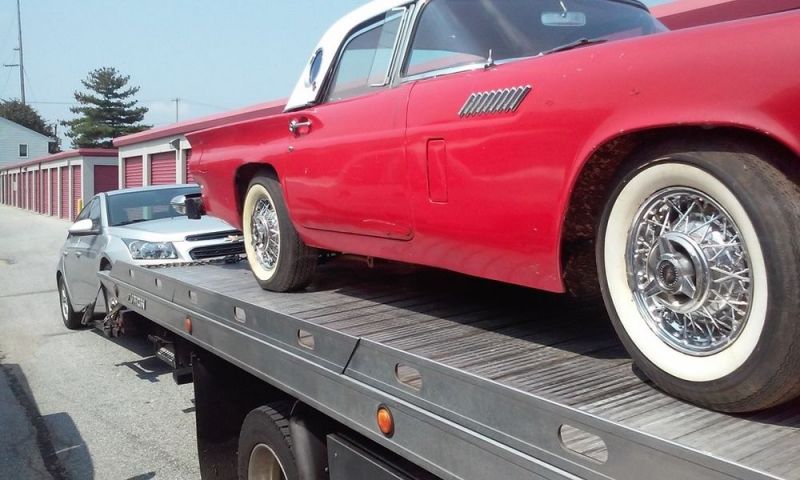 Feel free to ask me any questions about the car : corneliusctteague@ukcampers.com .

This is one out 1,363 of the rarest Ford Thunderbird manufactured in 1957 the E-code , they came with 312 Y-block
with dual Holley teapot carburetors. This vehicle began as a full restoration project 3 years ago, there has been a
lot of hours and funds invested into this build . This build did not begin as a concord build and was not planned
to be one . It has been a journey just getting this bird to this point in which finishing the body it is ready to
go on a rotisserie to complete it properly and then assembly in which we have interior door cards and panels also
the seat cover and various parts in which i'll attempt to add all in the pics. We do have the soft top roof also
and hard top as in pictures. I will be updating the info or answer any questions about this vehicle as possible for
those whom have interest.
Thanks for looking
Upate;
The engine is a fresh full rebuild and has never been started both carbs were just overhauled and all parts
anodized . The transmission and torque converter have been rebuilt . Engine and trans were done by highly reputable
technicians and if needed you could discuss the overhaul and rebuilds with them. At this time the chassis is
separated from the body still if needed i will mate them for transporting. The frame has be replaced with a frame
direct from a 1957 T-Bird from Marvin Hills Thunderbird specialist out of Ohio. The original frame had been
modified and X was cut in which weakened the strength of it's structure to the point of loss of safety to being
road worthy so we replaced if something or a part we had doubt about it was replaced.
Thanks again.
Upate of info:
Would like to describe the body, it's pretty solid, it needs drivers side floor pan and rocker and passenger rocker
only a little repair around rear wheel wells. I'm trying to set up a link for added pictures. Will have it ready
shortly.