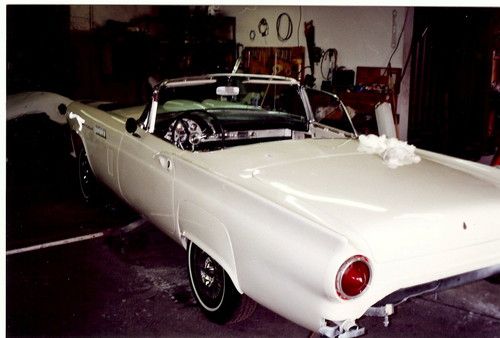 Here is a beautiful, classic 1957 2-seater Ford Thunderbird with a strong running 312 cc V-8 engine, automatic transmission, air conditioning, power steering, original hubcaps and fender skirts, and two tops - a matching Colonial White hardtop with portholes, and a black cloth top.  The engine was rebuilt in 1997 (with new valves, hardened valve seats, etc.), soon after I bought the car, and power brakes were added; I later upgraded the brake system further to include front disc brakes.  The car was stripped to bare metal and repainted its code-correct Colonial White in 1999; I have included a few photos of the repaint process.   I replaced the non-working original Thunderbird AM radio with a new Thunderbird AM/FM radio with cassette.  The original code-correct black-and-white interior is clean and in great shape.  New parts and improvements:  fuel line, radial white-wall tires, weatherstripping, springs, voltage regulator, water pump, battery, exhaust system with resonators, expanded radiator, shocks, 6-blade fan and more!  The car runs and drives fine and has always been garaged.  Title is clear.  The odometer reading on the title, when I bought the car in 1997, was 124095, so it has only been driven about 16,000 miles since I bought it, and a bit less since the engine work was done.  I have all the bills and receipts for work done, parts purchased, etc., and will include the Thunderbird Shop Manual in the sale.   I have had lots of Fun, Fun, Fun with this great car over the years, but now it is time to make room in the garage for something else.

A deposit of $750 is required within 72 hours of the end of the auction, with full payment of balance expected within 7 days of end of auction by certified check.  It is the buyer's responsibility to arrange pick up and transportation of the vehicle.

Please feel free to email me with any questions prior to auction end.