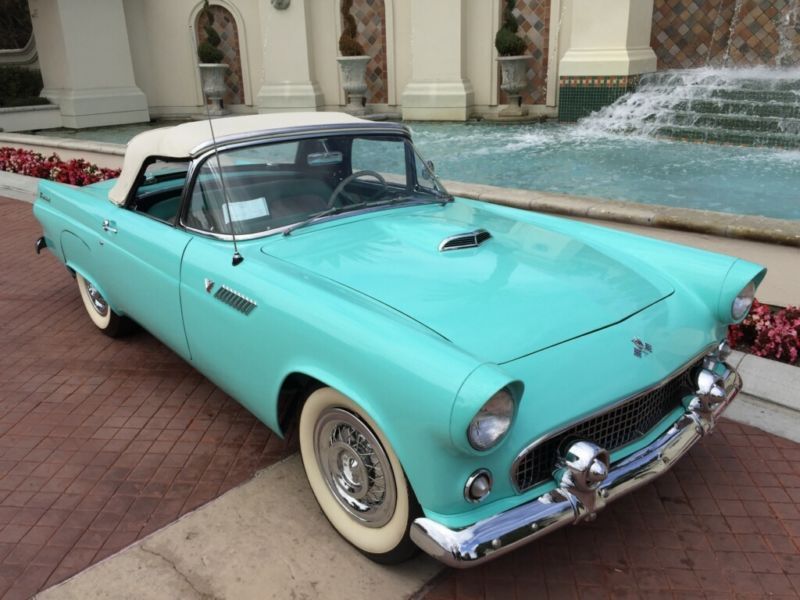 THIS IS A VERY SPECIAL CAR! IT IS A 1955 FORD THUNDERBIRD CONVERTIBLE THAT HAS APPROXIMATELY 17K MILES SINCE IT
WENT THROUGH A FULL RESTORATION. IT IS A BEAUTIFUL LIGHT BLUE WITH A BLUE AND WHITE INTERIOR WITH A BLACK
CONVERTIBLE TOP IN EXCELLENT CONDITION. IT HAS COLD AIR CONDITIONING POWER STEERING HEAVY DUTY RADIATOR WITH A
HIDDEN HIGH PERFORMANCE ELECTRIC FAN ELECTRONIC POINTS-FREE IGNITION AND AN ELECTRIC FUEL PUMP FOR EASY STARTING.
THE ORIGINAL CARBURETOR WAS JUST REBUILT. IT ALSO HAS THE ORIGINAL OIL BATH CHROME AIR CLEANER AND OPTIONAL CHROME
T-BIRD VALVE COVERS. SPORTS WIDE WHITE WALL TIRES WHICH HAVE THE ORIGINAL LOOK BUT ARE NOW RADIAL TIRES FOR SAFETY
AND HANDLING. THE CAR WAS ORIGINALLY A 6 VOLT WITH A GENERATOR BUT WAS CONVERTED TO 12 VOLT WITH AN ALTERNATOR FOR
BETTER LIGHTING AND BATTERY LIFE. THE CAR IS IN EXCELLENT CONDITION INSIDE AND OUT AND THE MOTOR HAS BEEN FULLY
DETAILED.