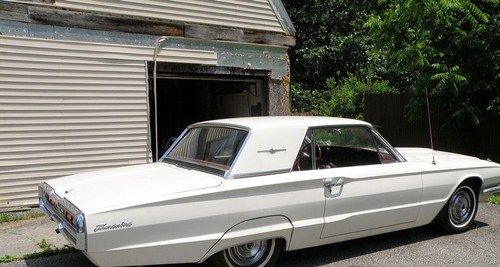 Condition: Used: A vehicle is considered used if it has been registered and issued a title. Used vehicles have had at least one previous owner. The condition of the exterior, interior and engine can vary depending on the vehicle's history. See the seller's listing for full details and description of any imperfections. ...
Up for sale is a beautiful 1966 Ford Thunderbird 2-Door Hardtop


The car is very clean and is mostly all original. I purchased the car from the second owner who owned it for almost 30 years. The car runs and drives great and only has 82k miles original miles! The body is in excellent, solid condition. The car has red leather interior, which is very rare. All original parts and the original papers and receipts will be included with the sale. The car will also come with the original window sticker! (Great addition for a car show.) No title but have a transferable registration. Good luck and happy bidding.

Also have new carpet, trunk liner, master cylinder and other parts. I still have the original master cylinder. New brakes and new battery recently installed. The only flaw in the interior is a torn armrest on the driver's side door panel. The power windows will also need repair. I will try to see if I can have them repaired before the sale.