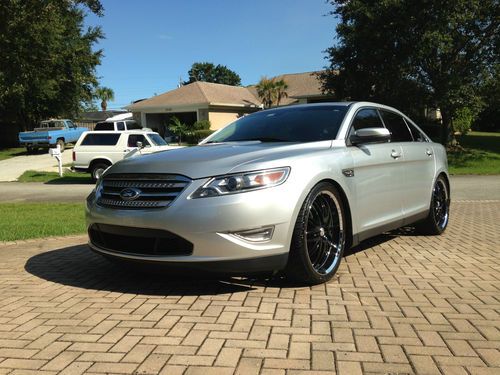 Super clean, fast and comfortable SHO. Car is in near perfect condition with the exception of a few tiny scratches and dings expected with a 3 year old car (probably less). Car has been garage kept since new. Non-smoker. Car is one owner with factory extended warranty. Car comes with all available options with the exception of cruise control assist. Car has 22' custom Verde wheels as well as H&R progressive rate springs lowering the car 1.5 inches. Car handles and rides much better than factory springs. Only other performance modification is AirRaid cold air induction system and a custom tune created by Livernoise Motorsports. Car comes with programmer with preloaded custom tunes designed specifically for this car. Stage I, Stage II, Stage III and Stage IV for your driving preferences. Car has been to track one time to test tune and ran 12.7 in the quarter mile! Car looks and rides like the full sized luxury car that it is, but is capable of blowing the doors off all the ricers running around as well as all the R/T chargers, challengers, comaro, and mustangs. Car is super comfortable as well as fun to drive. The AWD twin turbo performance is amazing and the heated and air-conditioned leather seats, navigation, bluetooth and top of the line stereo system make this car one of the most comfortable and enjoyable vehicle to ride in.