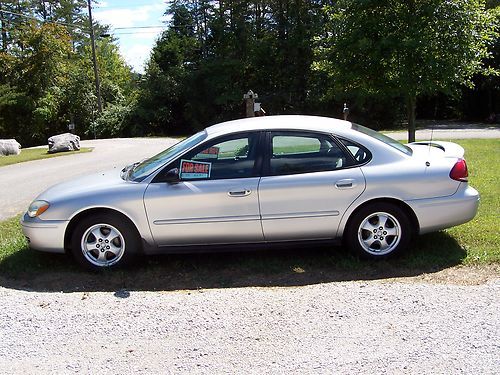 Condition: UsedA vehicle is considered used if it has been registered and issued a title. Used vehicles have had at least one previous owner. The condition of the exterior, interior and engine can vary depending on the vehicle's history. See the seller's listing for full details and description of any imperfections.Seller Notes:"NO KNOWN defects, Everything works as suppose to from factory"

2005 Ford Taurus SE, automatic,  AM/FM  with CD player, Tilt wheel, electric seate along with electric windows and power trunk release.Has all new brakes, serpentine belt and idler pulley, Has good tires, Runs good with NO KNOWN mechanical problems that I am aware of. Can be driven anywhere. Has cold AC and warm heat. Uses no oil. Reason selling is I co-signed for someone on car and she got hurt on the job and cannot work to make payments and I can't afford to make payments.I went thru everything and made sure it had no mechanical issues. Car has one small rust spot on the dog leg portion next to rear door. I can hold the car for 30 days unless prior arrangements are made.

The vehicle is for sale locally so I might end auction early. I have no buy it now price and I will not say what reserve price is, but it's lower than most of other vehicles I have seen for sale.  I require a 500.00 non refundable deposit withn 48 hrs. thru paypal