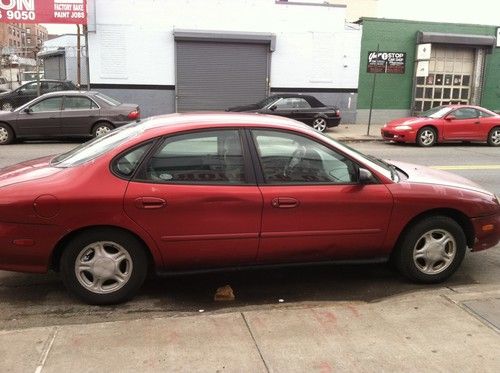 SELLING MY MOTHER IN LAWS 1997 FORD TAURUS AT NO RESERVE. SHE'S HAD IT SINCE 2003 AND BARELY DROVE IT.

HAS ABOUT 76,400 MILES. SHE HAS ONLY PUT ABOUT 19000 MILES ON IT IN ABOUT 10 YEARS. CAR HAS BEEN PARKED UP FOR A WHILE.
BODY IS KINDA BEAT UP. PAINT IS PEALING ON THE FRONT PART OF THE CAR. LOTS OF DIFFERENT DINGS AND BUMPS ALL OVER. WILL POST PICTURES SOON. BUYING IT AS IS. PLEASE TEST DRIVE OR INSPECT BEFORE BUYING IF U WISH.
SHIPPING IS RESPONSIBILITY OF BUYER. WILL HELP IN ANY WAY. THANKS FOR LOOKING.