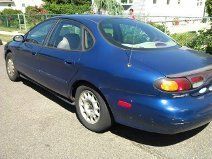 You are bidding on a 1996 Ford Taurus which still turns on and drives.  However, the brakes are not working.  May need new master cylinder and has a leak in either the transmission or motor. Its good for either restoration or parts.  Has a dent on the hood left side fender and rear passenger door as pictured.  Buyer is responsible for pickup or towing of vehicle.  Any questions please email me.