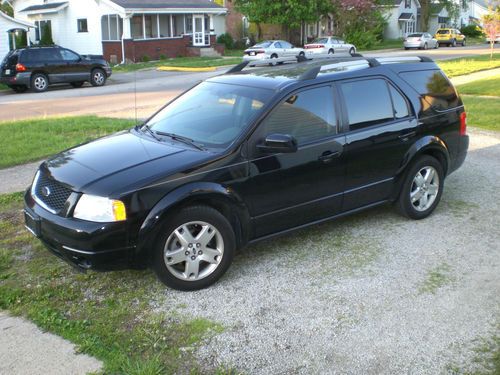 This 2006 Limited Freestyle with only 62k miles is fully loaded and comes equipped with AWD. It has new front brakes, good tread on tires, a recent oil change, and is in excellent overall condition. This vehicle has never been smoked in and has been well maintained. The interior is very clean and the leather is still in great condition. The exterior has typical wear for its age with a couple of minor scratches and small dings (no dents or large chips), but as you can tell from the pictures it looks very sharp. We are upgrading to a newer Toyota Highlander but the dealership gave me their typical low-ball offer for my trade, so I decided to list it one time on Ebay before we get the new car. I hope to get somewhere between the trade-in value and the private party selling value for the car, which presents a great oppurtunity for you to get it for a fantastic price. The reserve is set at $2,000 below Blue Book Value and well below Buy it Now price! If you want a Freestyle you will never find a nicer one for a better price. If you are local to the Warsaw, In area you are welcome to stop by for a test drive before the auction ends. Please call or text with any questions (574) 527-8870, Kyle. Thanks and happy bidding!