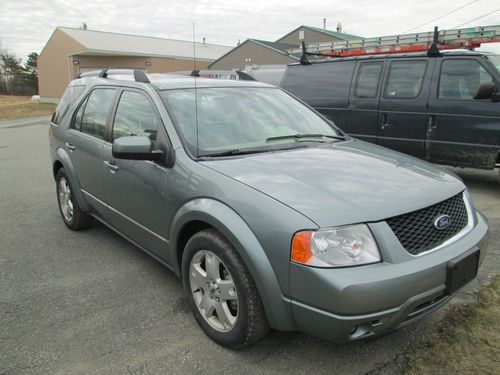 Condition: Used: A vehicle is considered used if it has been registered and issued a title. Used vehicles have had at least one previous owner. The condition of the exterior, interior and engine can vary depending on the vehicle's history. See the seller's listing for full details and description of any imperfections. ...
GREEN POINT AUTO PARTS IS ONE OF THE LARGEST AND MOST REPUTABLE SALVAGE YARDS IN THE NORTHEAST

WE HAVE 2005 FORD FREESTYLE LIMITED AWD, FULLY LOADED, WITH LEATHER SEATS AND SUNROOF.  THIS VEHICLE'S INTERIOR IS IN GREAT CONDITION AND THE EXTERIOR IS IN GOOD CONDITION AS WELL.  THERE IS A SMALL DING IN THE DRIVERS REAR DOOR AND SOME LIGHT DAMAGE TO THE REAR BUMPER BUT IS CLEAN OTHERWISE.

THIS FREESTYLE DOES NEED A REPLACEMENT ENGINE, WHICH WE HAVE AND IT IS INCLUDED IN THE PRICE.  WE ONLY ASK THAT IF YOU NEED THIS VEHICLE TRANSPORTED TO YOUR LOCATION THAT YOU PAY THE FREIGHT CHARGE FOR THE ENGINE AS WELL.

PLEASE CONTACT US WITH ANY QUESTIONS YOU MAY HAVE!