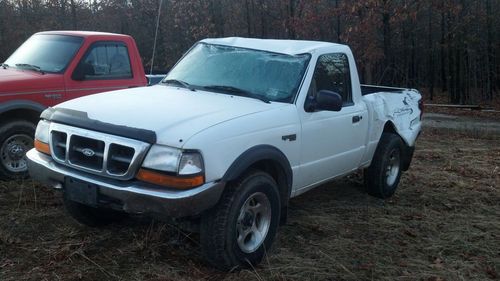 This is a 1999 Ford Ranger 4x4 single cab off road package.
3.0L 5 speed manual transmission, new clutch etc..
shift on the fly 4x4
The truck was driven every day until it went in to a ditch.
This truck was garaged every night, non smoker,
clean inside, no rips or tears, clean floor.
Everything still works, runs and drives
AC/Heat, CD player
windshield broke cab is bent all other glass is good please look at pictures before bidding.
Clean, Clear Missouri title NOT A SALVAGE TITLE !!
$500 deposit at the end of auction and Cash when picked up.
10 days pick up
bakersbabys@yahoo.com
I Revere the right to end action at anytime