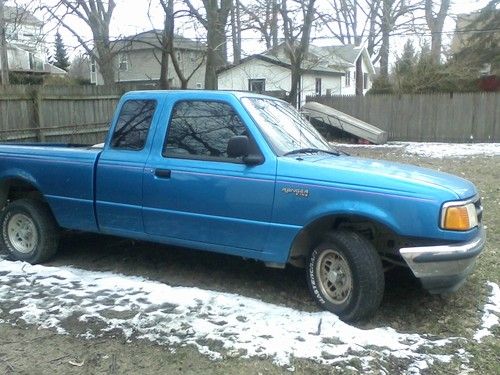 Condition: UsedA vehicle is considered used if it has been registered and issued a title. Used vehicles have had at least one previous owner. The condition of the exterior, interior and engine can vary depending on the vehicle's history. See the seller's listing for full details and description of any imperfections.Seller Notes:"Engine is siezed,and almost ready to be removed. The front bumper is bent down,the rest of the body is good cond.It has 4 speed manual,newer clutch,fair tires,alloy wheels. Steering gear leaks PS fluid and it is by-passed at the pump (need new pressure hose)"

1993 Ranger XLT Extended Cab, Truck is in pretty good cond. except, it needs an engine, power steering work, right rear jump seat is gone (behind passanger seat) and front bumper is bent down. It wouldn't take too much to make this a good driver or part it out! * This vehicle is not drivable, it would need to be towed or trailered !