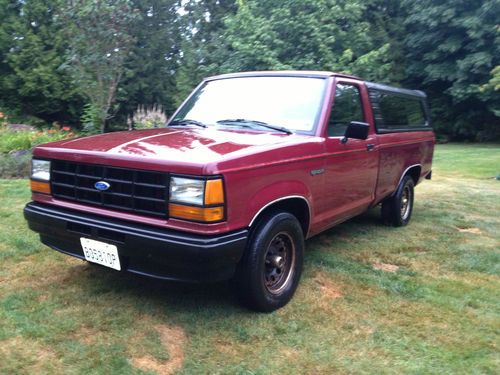 Condition: UsedA vehicle is considered used if it has been registered and issued a title. Used vehicles have had at least one previous owner. The condition of the exterior, interior and engine can vary depending on the vehicle's history. See the seller's listing for full details and description of any imperfections.Seller Notes:"Old, high mileage, dents and dings on body, faded worn paint, old worn tires (the tires are barely legal, unsafe, and need to be replaced), uses a little oil sometimes, old rusty steel wheels, tailgate can be difficult to open (needs adjustment), tail pipe rubs on body slightly (needs a better exhaust hanger), non-original transmission (same model as original, newer, and works well, though), shifting into reverse can be tricky occasionally, canopy is difficult to latch shut (needs adjustment), has a dash bulb burned out, engine compression is still OK but at the edge of OK (will need a rebuild in the next few years). The bed has some bends here and there, but nothing severe, due to the vehicle being totaled by a previous owner. The vehicle had a rebuilt Oregon salvage title when my family purchased it. At this time, the vehicle has a normal, non-salvage Washington title just like any normal vehicle. Needs new license plate tabs. Exact mileage unknown; original speedometer replaced."