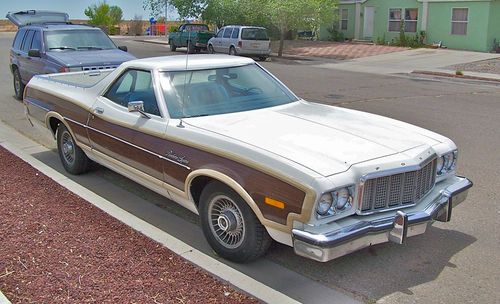 Up for auction is a really nice old Ranchero. This truck has never been overhauled or restored it a "Survivor", its had the paint touched up here and there over the years to keep it looking good but apart from that nothing. Its had good maintenance and has always been garage kept and it runs and drives just like a 1975 Ranchero should. This car should go to a collector or someone that will keep it as it is. Presently its registered and insured and I enjoy driving it quite often, and I still get a kick out of showing it off (or should I say showing off in it), but its time for it to have a new home. Anyway, all the systems work properly, air conditioning, brakes, power steering but the radio could use an upgrade to one of these radios that look just like the original but have all the features of the new radios. It has new tires and just last month I replaced the water pump the belts and the hoses and had the radiator serviced and it has a new duel exhaust system and it sounds great. Also as part of the deal I'll give the "Roadside Spares" (hoses and belts). Please call me on 505-452-7943 if you have questions or would like to come and see it. As for payment, I expect the winning bidder to send me a deposit via PayPal and either wire transfer the balance or bring cash when they get here. However, after inspecting the car if its not as I described it I'll refund your money.

I'm also offering this car locally so I reserve the right to end this auction without notice.