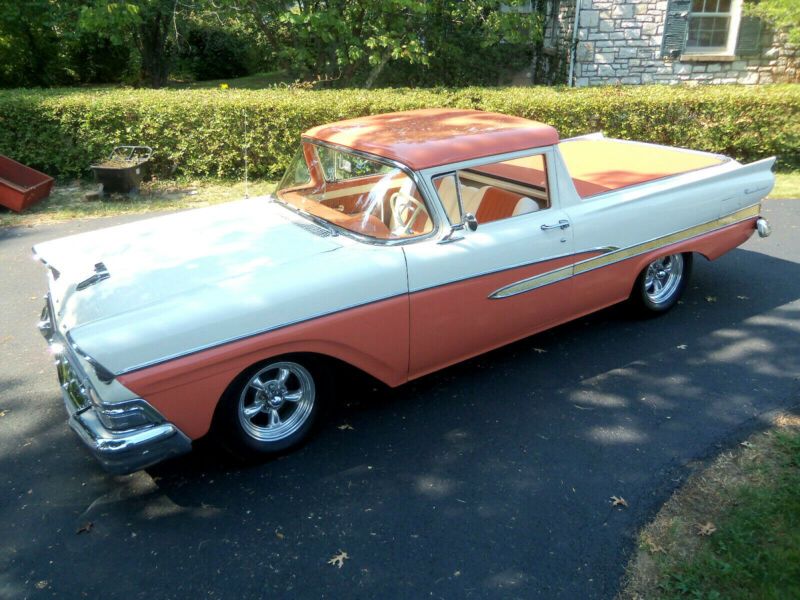 This vehicle is powered by, I believe, the original 292 Y block V8 with a Ford Autolite 4V carburetor and dual
exhaust with Flowmaster mufflers. It starts instantly and runs very nice. The transmission is the cast iron 3 speed
cruiseomatic and the rear is the indestructible Ford 9" . It also has power steering, which has just recently had
the control valve and cylinder rebuilt, and power drum brakes. I also just replaced the alternator.

The chrome including bumpers, emblems, trim, and door handles are excellent.The front bumper was replaced shortly
after I received the car due to an incident which happened during transporting the car to me, and at the same time
both turn signal surrounds were slightly creased, which is visible in the 7th and 8th photos. I did purchase a very
nice pair to have rechromed and replace them, but then decided not to, because the slight damage is not real
noticeable. I will include the two extra ones with the car, and also I have a new complete set of the gold anodized
aluminum side inserts that will come with the car. They probably were not available at time of restoration. All
the stainless steel trim has been polished. The 15 X 6" front and 15X8" American polished 5 spokes are very nice.
Tires are like new 215/65 front and 255/60 rear. The windshield and two side windows appear to have been replaced,
and in excellent condition. The rear window is excellent and original with the Ford script, and the vent widows are
also original, but have some bubbling around the edges.

The beautiful interior was professionally redone just before I purchased it. The newly upholstered power seat is
from a later model Ford Crown Victoria and fits like it belongs there. I believe the white surfaces of the seat is
leather. last year I restored the original steering wheel, and the speedometer cluster. It has an amplified after
market sound system, which can blow your ears out, which was installed in 2013 with receipts for over $400.00, but
the stock Ford AM radio is not a functional unit