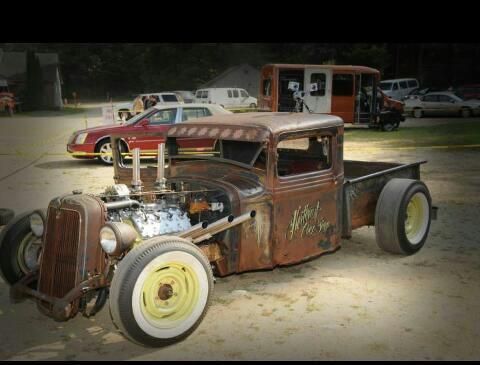 Condition: UsedA vehicle is considered used if it has been registered and issued a title. Used vehicles have had at least one previous owner. The condition of the exterior, interior and engine can vary depending on the vehicle's history. See the seller's listing for full details and description of any imperfections.Seller Notes:"Built flawlessly"
This truck was built by Jason Grimes of Northeast Chop Shop in Windham, Maine.  The truck is a 1934 Ford cab and grill along with the original lights.  The bed is a chopped down Willys with a functional tailgate, keg for gas tank and 34 taillights.  The truck has a 1953 Merc flatty in with dual Stromberg's 96" and a 5 speed S-10 trany to allow for faster speeds at low RPM.  A 3:73 rear end was used all mounted to a Z'd marmin frame with all new rims, tires from Radir.  This truck runs and drives mint, stays cool with a fan and a 12 volt system.  Custom pin stripping by One Armed Bandit.  Truck comes with Bill of Sale only, there is no title.