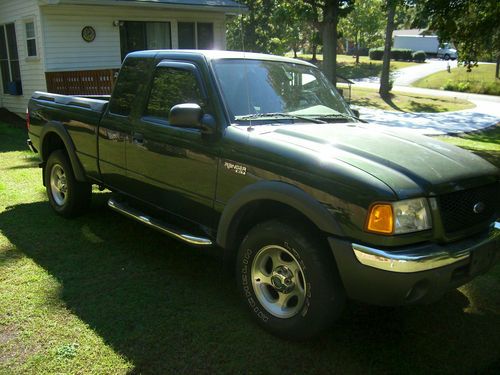 Condition: UsedA vehicle is considered used if it has been registered and issued a title. Used vehicles have had at least one previous owner. The condition of the exterior, interior and engine can vary depending on the vehicle's history. See the seller's listing for full details and description of any imperfections.Seller Notes:"THIS IS A ONE OWNER PICKUP, WITH MINOR SCRATCHES, AND A SMALL DENT ON RIGHT REAR BELOW TAIL LIGHT SEE IN PICTURES ABOUT THE SIZE OF A HALF DOLLAR"

UP FOR SALE IS A 2001 FORD RANGER XLT 4 DOOR 4X4 PICKUP, THIS TRUCK IS A ONE OWNER WITH A VA. TITLE SHOWING 38 MILES WHEN  IT WAS FIRST TITLED, IT HAS THE VERY POWERFUL 4.0 V6 ENGINE, POWER WINDOWS ,DOOR LOCKS, TILT, CRUISE, COLD AIR CONDITIONONG, THE TRUCK NOW SHOWS 177K MILES, BUT HAS BEEN VERY WELL TAKEN CARE OF, IT HAS A BED LINER AND REESE TRAILER HITCH USED FOR A UTILITY TRAILER ONLY,THE TIRES ARE GETTING THIN, THEY ALL MATCH, BUT I WOULD ADVISE PUTTING AT LEAST TWO NEW ONES ON FOR WINTER,SMALL DENT ON REAR UNDER TAIL LIGHT, AND A SCRATCH ON THE HOOD, WINTER AND HUNTING SEASON IS COMING AND THIS WOULD MAKE AN EXCELLENT TRUCK FOR EITHER OR BOTH. LETS DONT WASTE EACH OTHERS TIME YOU MUST HAVE +5 REVIEWS OR MORE, OR CONTACT ME BEFORE BIDDING, PLAIN AND SIMPLE. I CAN ASSIST WITH A COURIER IN GETTING THE  TRUCK TO YOU, BUT YOU MUST PAY FOR SHIPPING, UNDERNEATH VEHICLE IS IN EXCELLENT CONDITION, WITH NO RUST!!!! THANKS FOR LOOKING!!!!! TRUCK ALSO HAS NICE FACTORY AM FM CD STEREO WITH 4 SPEAKERS!!!