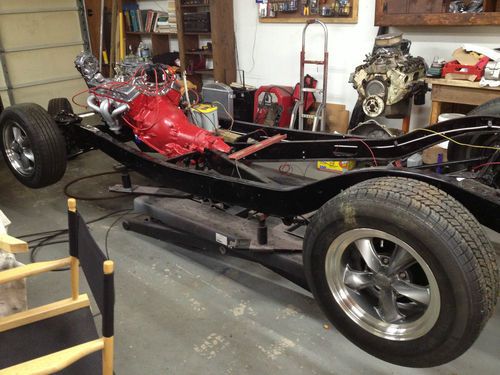 1935-40 Ford Frame, Rebuilt and dressed out 350 Ci Chevrolet Engine, Billet Valve Covers, New Chrome Intake, Holley 4160 Carburator, Hei Ignition, Chrome Pulleys and Alternator and block hugger headers. Engine Has been started and it runs Very well. The Transmission and rear end were operational before the wreck and the body removed. There is no frame damage. Heidts front crossmember with tublar A arms, power Mustang II Rack and Pinion steering. Set of Foose Wheels, look like AR Torque Thrust, in excellent condition, Chevy Bolt Pattern. Stainless tank in great shape, I polished some of it and it will come out very easily. I'm not sure but would guess the Rear end is a 55-64 Chevrolet, no Idea what ratio. I bought it to build a 36 Ford Roadster but ended up buying an incomplete project car with the frame under it. Again My Loss is your gain. No warranty on any of this assembly.