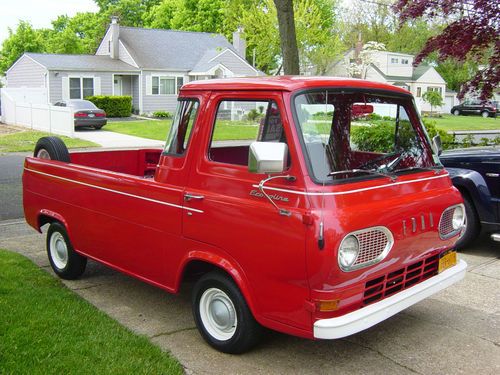 THIS IS A 1963 ECONOLINE PICK UP IN ORIGiNAL CONDITION THERE IS NO ROT EXCEPT FOR PANEL ON DRIVERS SIDE BEHIND DOOR( NEW PANEL INCLUDED WITH SALE) THERE IS A 170 CI STRAIGHT SIX WITH A THREE SPEED MANUAL TRANS , REBUILT CARB, NEW FUEL PUMP NEW SHOCKS AND MUFFLER.INTERIOR IS VERY CLEAN WITH MISSING HEADLINER AND SMALL TEAR ON DRIVERS SEAT  FLOORS ,DOORS,CHASSIS AND BED ARE RUST AND ROT FREE EXCEPT FOR WORKING TAILGATE ALL LIGHTS,WIPERS SIGNALS AND HEATER WORK. FUEL AND TEMP GAUGES WORK, BUT SPEEDO NEEDS  REPAIR . DRIVES GREAT WITH NO VIBRATATIONS OR PULLING. NEEDS A HEAD GASKET AND MAYBE HEAD NEEDS TO BE REBUILT WILL BE SOLD AS IS WHERE IS WITH NO GUARANTEES AND IS ALSO FOR SALE LOCALLY ASK QUESTIONS AND COME CHECK IT OUT BEFORE BIDDING GOOD LUCK. FREE LOCAL DELIVERY WITHIN 50 MILES. BUYER MUST ARRANGE AND PAY FOR SHIPPING FURTHER THAN 50 MILES. WILL HELP LOAD.