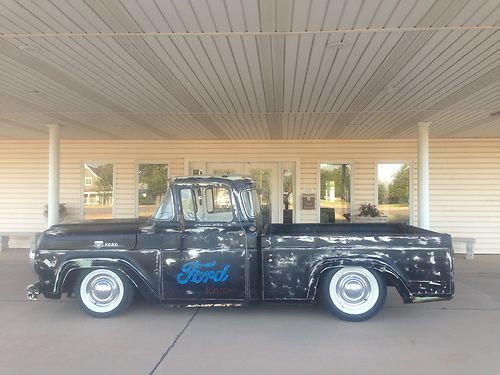 ~ With Todays Technology in Our Shop We are able to Build some of the Sweetest Rat-Rod's out their. Today We are offering with this No Reserve Auction, a 1959' Custom Ford Big Back Window, Short Bed Rat-Rod. This is a True Old-School' Custom Barn find from the State of Missouri... With it's all Original Patina' She Stands Out from all Others! This Custom Build has a High Performance Running 302 Edelbrock  Holley TRW Fel-Pro Crain HEI Mallory Ext....... C-6 Hard Core TCI Shift Kit, Custom Colum Shift, Original Bad Stopping drum break's, Custom Frame work, Front & Back 6" C-Notch, New Wiring, Custom Cobra-Mustang White Interior, Custom Merc Steering Wheel, 390 Possie Rear-End...... Estimated 350 HP. This Truck is Extremely Quick, with Custom Harley Exhaust Mufflers.... High Bidder Gets This All Custom 59' Truck (Only One that Exist Like This) *****Click link to Below To View YouTube Video http://www.youtube.com/watch?v=00e4n9Vc8-A