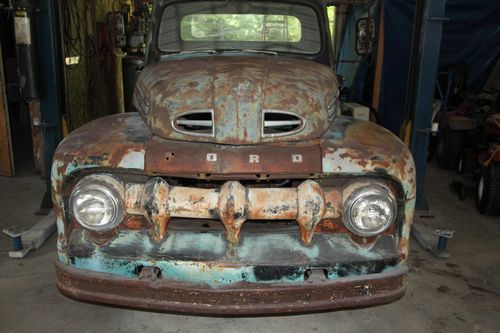 Condition: Used: A vehicle is considered used if it has been registered and issued a title. Used vehicles have had at least one previous owner. The condition of the exterior, interior and engine can vary depending on the vehicle's history. See the seller's listing for full details and description of any imperfections. ...
Up for bid is an awesome 1951 Ford F2.  This truck is very solid.  Keep it as an F2 or convert to F1.  Many new parts include radiator, brakes and wheel cylinders(front)and other components, new master cylinder installed, New vinyl on the seat, floor patches, and misc parts pieces.
Almost complete trim and all in good shape, some glass,great tires mounted and balanced (on three wheels), one newer wheel and three originals,  all four hub caps, the original flathead V8 239ci motor, heads and intake are there but motor is "stuck", original tranny and rear.  Frame is solid with only service rust.  Any questions done hesitate to ask.  No title, bill of sale only.