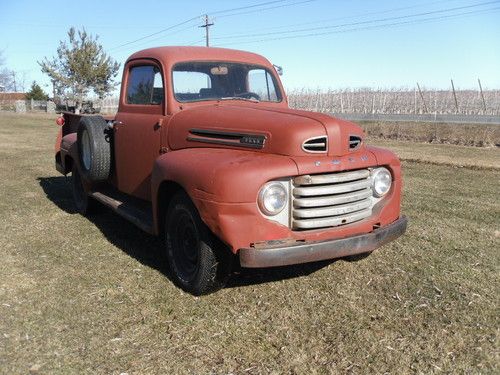 UP FOR SALE IS A 1948 FORD F-2 PICKUP.  3/4 TON. NICE SMOOTH RUNNING GOOD SIZED V-8 WITH A 4 SPEED MANUAL FLOOR SHIFT TRANSMISSION.  THIS IS A DAILY RUNNER.  BRAKES WORK. RADIO EVEN WORKS. NO CRACKS IN THE GLASS. NO RUST EXCEPT AT THE BOTTOM OF ONE STAKE POCKET, REFER TO PICTURE.  GOOD SOLID BODY WITH MINOR SCRAPES  AND DINGS.  FLOORS ARE SOLID, BED IS ORIGINAL AND IN NICE CONDITION.TIRES ARE USABLE.   INTERIOR IS NICE AND ORIGINAL EXCEPT THE SEAT HAS BEEN REPLACED, NOW ITS NOT ONLY A FUN TRUCK TO DRIVE, ITS COMFORTABLE. CLEAR TITLE.