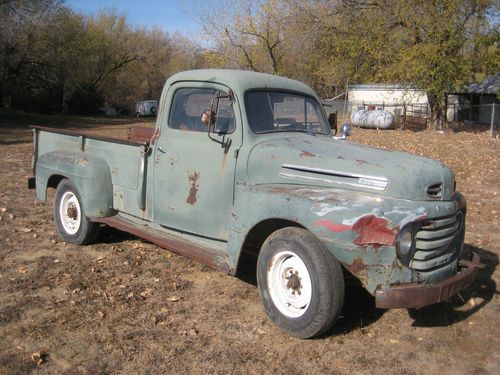 1950 ford f-3.  Clear Colorado title.   This truck came out of Colorado and was used on a boy scout camp in the rockies.  As you can see from the pictures, it has been well used, but not used well.  The flathead 8 is not stuck.  I don't know how long the gas cap has been missing, but it has been stored inside for the last 40 years or so.  This is the long bed, which are becoming hard to find.  I bought it for the cab, but found a slightly better one, so this is back for sale.  The cab is solid, but has 2 dents on the top.  Very manageable if you have the know how.  I would personally try to find replacement fenders, but I suppose these could be fixed, with money or skill.

I think the wheels may be split rim, but I couldn't tell for sure.  They are firestone 17 1/2" wheels.  If they are indeed split-rims, or "widow makers" please educate yourself on the dangers of the same before you go monkeying around with them.  There is a radio sitting on the seat, but it is not a ford truck radio of this era.
This is a crusty old workhorse, and will take time, money and skill.  I make no representations that this is an easy restoration, it is not.  Please plan accordingly.