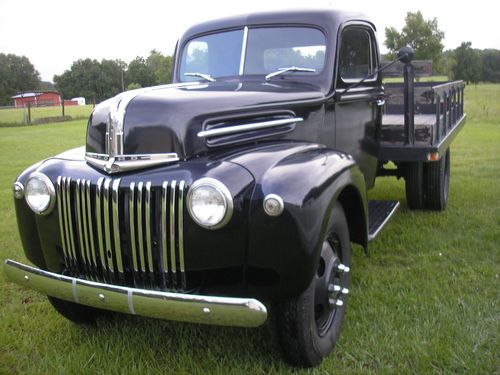 I am offering my Rare civilian 1942 Ford Truck for Sale.This is a pre-WWII truck with only 4500 mile on the original working odometer. Then engine, transmission and frame ID numbers match. Ford stop producing tucks for the civilian market on February 10 1942 after the bombing of Pearl Harbor to produce military vehicles for the war effort. Very few of the early civilian trucks have survived. Flathead V8 and 4 speed transmissions runs great. The body is solid no rust repair. The door hinges and hardware are original and operate like new. The only minor rust was found in the center of the floorboard when the original floor mat was taken up easy repair. The rest of the cab and fenders are solid no rust. The electrical wiring was replace and upgraded to12v with a fuse block for safety but can be converted back to 6v easily.  All gauges work and the wipers were converted to electric. The fuel tank was relocated from inside under the seat to the outside frame utilizing an electric fuel pump.  The frame shows very little wear no pits fromroad debris indicating low miles. The steel Bud Wheels are stamped Oct. 41 with new tires on front. Clear Florida Title.

You are welcome and encouraged to inspect the vehicle prior to purchase. Vehicle is sold as-is no warrantee. $ 500.00 deposit due within 48 hours of agreement to purchase.