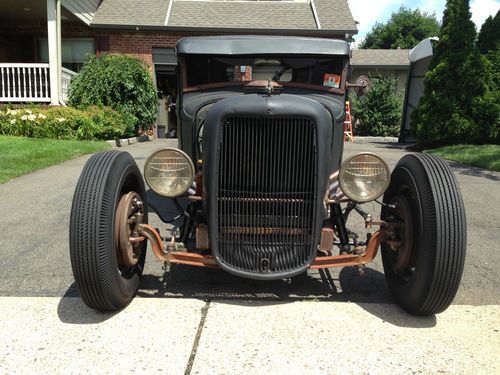 Condition: UsedA vehicle is considered used if it has been registered and issued a title. Used vehicles have had at least one previous owner. The condition of the exterior, interior and engine can vary depending on the vehicle's history. See the seller's listing for full details and description of any imperfections.Seller Notes:"Truck is sold as is with no warranty."

I have a clear N.J. title with a passed N.J. inspection good for almost 2 years!!!
It has a 1946 flathead which has been rebuilt about 3000 miles ago.
It runs great with no smoke at all. I was told the motor has a 4" Merc crank with Nos heads that were milled. That's all I know.
I bought the motor from a friend's uncle & I believe what he told me to be true & accurate.
It has a 1934 3 spd & banjo rear. Both have been rebuilt & function perfectly.
Brand new wiring harness & wiring throughout & all electrics work excellent. Electric fan.
Fuel gauge is not showing correctly & I have an electronic set up that I never installed. This is included with the truck.
Truck rides great with new suspension all the way around including air shocks in the back & gas shocks up front.
The cab has been rubber mounted for a smoother ride.
I have Howells sheet metal for the door bottoms, cowl bottoms & cab corners that go with the truck,
I also have new side window channel kits for both doors if you want to install side roll up windows.
Truck turns heads everywhere we go & always has the largest crowd around it at the shows.
Please ask questions or come by to take a look or ride!
This truck is also being sold locally, so I reserve the right to close this auction at anytime.