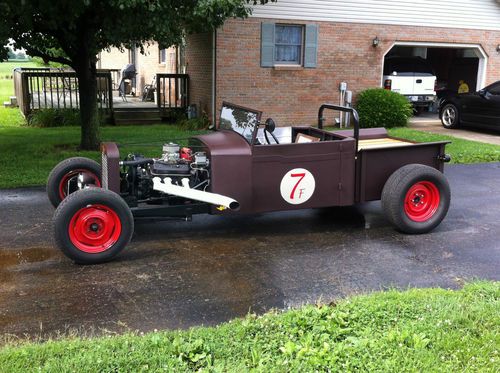 Up for sale is a roadster modeled after a 1930 model A roadster pickup.  This cab is NOT an actual model A roadster.  The cab is all handmade out of new steel along with the grill shell and bed.  The frame is a new 2x4 steel frame also.  Has a 10 bolt posi camaro rear-end with 3:42 gears.  1940 dodge straight axle upfront.  Has 4 new tires, new aluminum radiator, lokar shifter, and a new edelbrock 500 carburetor.  The motor is a 4.3l v-6 with a 700r4 transmission.  Runs and drives great and has plenty of power, also gets great gas mileage.

For more questions the easiest way to get ahold of me is by calling 1-812-393-0145, name is Lanny.  NO TEXTS please.  I will try and check my email also and get back as soon as possible, but prefer phone calls.
Shipping will be arranged by the buyer, and would like to have it out of my way in a week unless other arrangements are made with me.
Thanks to the bidders and feel free to contact me with any questions.