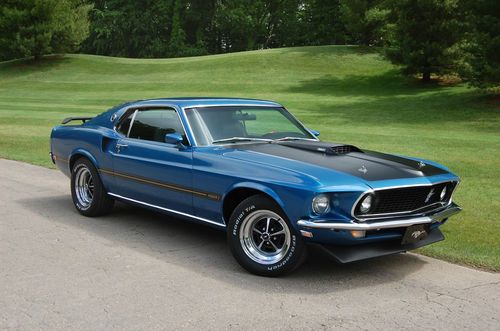 Up for auction is the legendary 1969 Mach 1 you have been waiting for – a true “S Code” 390 Big Block, updated to deliver a pro-touring like tight drive, performance, and comfortable drive

The paint, chrome, and interior are near perfect, and the car is rust and dent free.  The engine starts easily, does not overheat, and delivers great performance.  All instruments work, including original radio and clock.  This high performance, high torque monster, delivers a very tight, responsive, and firm feel.

This extremely nice muscle car will make you the coolest guy on the block, and local car show winner. The reserve price is in the low $40Ks, and as outlined in the restoration history below, the true car guys will know the BuyNow price is worth every penny.

This beautiful big block 1969 Mach 1 received a complete, ground-up restoration that began in 2008 by a Ford Motor Company engineer.

The Mach 1 was purchased by the Ford engineer on August 5th 2007 from a gentleman in Imlay City, MI, who stated that he had bought the car from someone who had brought it up from Georgia (where it was originally sold in 1969).

The Ford engineer bought the car because it was very solid, and that the torque boxes, inner fenders, quarter panels, door frames, hem flanges, and trunk floors where all very solid.  There was a quarter sized bubble on the left quarter panel in front on the wheel opening, and on the left door skin near the rear.

Body and Paint - The car was taken down to a rolling chassis, and then the bottom of the car was sand blasted.   After sand blasting there was some pin holes discovered in the passenger and drivers floor.  Patch panels were purchased and professionally welded in place.  The quarter panel and door perforations were cut out and new patches welded in (less than 3 x 3” patches). The entire inside of the body shell was painted with POR paint, including liberal application at the inside quarter panel to wheelhouse, the entire floor, roof and inside the doors.

The outside of the body was stripped to bare metal.

The engine compartment and inner fender wells were sanded and wire brushed and painted with rustoleum primer and then matt black.  The entire underside of the vehicle was also painted the same way.

At this point the car was as solid as new and far better protected from future rust.

The outer surface was primed with epoxy primer, and thenurethane primer was used to block sand the body to its mirror finish.  The Mach 1 was then professional painted by CPR in Howell, Michigan, in a Acapulco blue color coat and clear.  The paint was then color sanded and buffed toits current gloss.

Front and Rear bumpers were those on the car as purchased.  New back up light and side light bezels were installed along with the quarter window moldings.  Also, a new windshield was installed; all weather strips were replaced with new.

Chassis - The front suspension was rebuilt with all new bushings and ball joints.  The steering system was retrofitted with a Borgenson integral gear.  The rear suspension received new bushings.  The shocks and springs front and rear were also replaced.

Ford front disc brakes and spindles were installed toreplace the front drums.  A Hydra Techpower booster was installed.  All brake lines were replaced along with stainless fuel system lines.

The rear brakes were rebuilt with new wheel cylinders, newshoes and springs and new drums.

The Mach 1 got new tires and alignment in the spring of 2012.

Powertrain - The original engine showed a lot of wear so a good engine block (period correct), crank, and rods were purchased from a specialist in Ford FE used parts.  The block was professional cleaned and machined .030 thousands over and new pistons were fitted to the reconditioned rods.  A new Lunati camshaft was installed with a “Cobra Jet” grind.  The cylinder heads were reconditioned with hardened valve seats, new valve guides and fresh valve grind.  All machine work was done at the machine shop at the B&P NAPA in Plymouth, MI.  The engine was professionally assembled by a retired mechanic from the Ford WHQ garage.  A new oil pump and heavy pumpshaft was installed.  A new Edelbrock aluminum intake manifold was installed.  FPA ceramic coated exhaust headers were installed, in addition to new turbo mufflers.  The custom exhaust included new stainless (correct) quad.  The distributor and carburetor were rebuilt by a Ford specialist.  The export brace and Monte Carlo bars were replaced with new (original were chrome and showing wear). The original radiator was replaced with a Griffin 3 core aluminum with an overflow tank.  The radiator has an electric pusher fan that will kick on at 180 degrees.

The C6 Cruise-O-Matic automatic transmission was completely overhauled by a Ford Dealership technician, and enhanced to include an over drive that takes special GM synthetic lube.  A shorted drive shaft was fabricated by a local drive shaft specialist.  New u-joints were installed.  The overdrive is engaged by pressing a switch located to right of the high beam light switch on the floor.

The rear axle was rebuilt with a new 3.91 gear set (it doeshave a posi-traction diff).  New axle bearings were installed, this work was done by a specialist in Ford drivetrains.

Electrical - The wiring harnesses were unwrapped, cleaned, inspected and re-wrapped.  The engine ignition was retro-fitted with a Petronix 3 solid state system with a Petronix coil, new ignition wires andcap/rotor were installed.

This beautiful Mach 1 was completely restored.  Virtually every nut and bolt in the entire car was removed, stored, and/or replaced. Brackets were sandblasted and painted, and chrome and stainless polished.

Please call Paul at 248-573-5013 if you have any questions or would like to arrange to inspect the car (before end of auction).  PayPal account required to purchase the car, with a $500 non-refundable deposit required within 48 hours of end of auction.