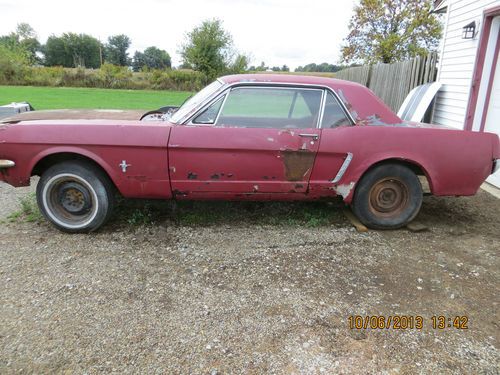 Condition: UsedA vehicle is considered used if it has been registered and issued a title. Used vehicles have had at least one previous owner. The condition of the exterior, interior and engine can vary depending on the vehicle's history. See the seller's listing for full details and description of any imperfections.Seller Notes:"BAD"

They say anything can be rebuilt.well maybe.. I bought this for parts for a project that Im working on. I removed the Instrument controls ( wiper switch, lite switch, lighter, pedal assembly, engine & trany.). the rest is up for sale. the car is in bad shape when I jacked it up I almost broke it! the frame rails are shot. floor pans are rusted bad. it would take a LOT to rebuild. but there are many useable parts here. including all glass, window regulators, wiring, I unplugged the switches I took out did not cut anything, but did take the harness from wiper switch to wiper motor. the car according to numbers was a 6 cyl. but it had a V-8 in it which I removed. some one must have converted it to V-8 before, it still has 8cyl frame mounts, accerlator linkage, and all 5 lug suspension, including the spindles, and steering linkage. car still retains a good steering column and gear box. I am running this as a NO RESERVE auction so high bid wins. would prefer full payment via paypal. within 7 days. or cash on pick-up if earlier. either way would like a deposit of 150.00 in 48 hrs.   the car dose come with a title that matches fender stampings and door tag.... BUT READ CLOSLEY

please look at pictures closely. what you see is what you  get. I strongly believe this is a parts car, but that's strickly up to winner. winning bid is selling price. there is no buy-it-now

will answer any questions I can but be reasonable, I don't expect a lot for thiscar so I don't expect to lay under it and take pictures of the rust..   thanks and good luck bidding    8 inch rearend..

have had a couple people ask about a two wheel dolley to transport  the car, I would strongly urge the winner to use a trailer. look closely at picture # 12, I think it would be dangerous to try to pull car with that much force on the front end, as the fender would be holding car together. when I picked it up it wasn't that bad as I believe the engine & trany was acting as a 3 point brace for the car...   also YES the bucket seats are both passenger seats!!! I don't know what previous owner was thinking there!!!!!

I WANT TO ADD DETAILS. I answered a question about the dash pad incorrectly. the dash pad is black but appears to have been either painted or dyed. If you look through windshield  down at pad you can see red where it appears the sun faded it.. it is not cracked or warped, but it does have a 1/2 crack on drivers side where the chrome trim under pad ends next to window pillar