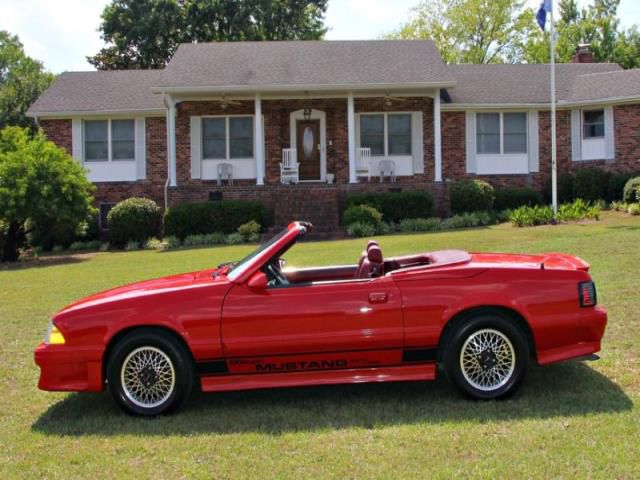 This is a rare and unique car. If you're looking for an original car (other than the decal on the bottom of the doors & the engine modifications for more power) that will make you feel unique, this is the one. It drives as good as it looks and you will get many compliments from other drivers. Almost everything has been replaced or inspected and found to be in great working condition. According to what records I can find there were only 450 of these made and this was number 247 of 450. The Mustang GT's power front disc/rear drum brake system was standard equipment.Significant deviations from the factory GT chassis began with the elimination of the stock Mustang wheels. ASC/McLaren carried over its use of the honeycombed mesh, cast-aluminum, 15-inch wheels from the earlier Capri program, which were supplied by Italy's Motorsport Wheel Company. They were shod with directional Goodyear VR radials. For the 1989-'90 models, the same tires were installed on new directional five-slot Enkei wheels from Japan.The other significant change has to do with the unit-body structure. With the removal of the Mustang LX's fixed top, structural rigidity was compromised, a condition that was rectified with the installation of reinforced rocker panels. This was a deviation from practices employed during the Capri program, which added bracing below the rear cowl.What to watch for: The 1987 and up Mustangs featured revised front-end geometry with new strut housings. Strut travel was also increased. Combined, it provided the Fox platform with greater cornering stability. Additionally, the aftermarket industry has been providing suspension and brake upgrades for many years. Although owners of truly rare cars tend to maintain stock characteristics, it's still possible to find an example with such upgrades installed.BODY & INTERIORContrary to what one may think, Ford did not send incomplete, body-in-white LX coupes to ASC/McLaren. Each was complete, including the aforementioned 5.0 engine and GT underpinnings. Henry Huisman, who worked at ASC and is now the owner of Paradise Automotive--supplier of NOS, reconditioned and used ASC/McLaren parts in Odessa, Florida (www.ascmclaren.com)--tells us they were also fitted with the GT front fascia from the factory."Once they took delivery of the car, they cut the top off and removed the interior in order to fit their own manually-folded top and power metal tonneau cover. Like the Capri, they pulled the windshield back about 20 degrees, which necessitated the installation of side windows unique to these cars. They also added side skirts, taillamp covers and a rear spoiler, and removed the stock emblems," explains Henry.Once the exterior modifications were completed, the cars were then painted a variety of special colors, which varied from one year to the next. "Ford shipped the cars, usually finished in silver or black, so in most cases the door sticker--which would have the paint code--will not match what ASC/McLaren ultimately applied. The underside of the hood should still exhibit the original Ford color," cautions Henry.Interiors were also extensively modified. With the rear seat removed, additional storage was made available, à la Corvette, below the stowed top and corresponding cover. The front seats were given extra padding and re-covered in embroidered leather; door panels and the armrests were also redesigned. Standard Mustang GT instrumentation remained, however.Standard features included power steering, tinted windows and even air conditioning later in the series; however, options such as a Whistler radar detector and Recaro bucket seats were few. The Recaros were dropped after 1988, mostly due to the fact few buyers selected the $1,500 option.RESTORATION & PERFORMANCE PARTSLow production throughout its history and the ultimate suspension of the conversion program during the 1990 model year left behind an extensive collection of ASC/McLaren-specific NOS parts, which has been serving the needs of owners and restorers alike since. Coupled with a vast network of OE and aftermarket performance parts suppliers, restoring one of these rare two-seaters--or administering acceleration and cornering enhancements--is far easier than what one might expect from such a low-production specialty model.EngineProviding plenty of grunt for the sporty ASC/McLaren was a standard-issue Mustang GT high-output 5.0-liter engine rated for 225 hp, which was an improvement of 25 horses implemented in time for the 1987 models. No performance mods were made by McLaren.