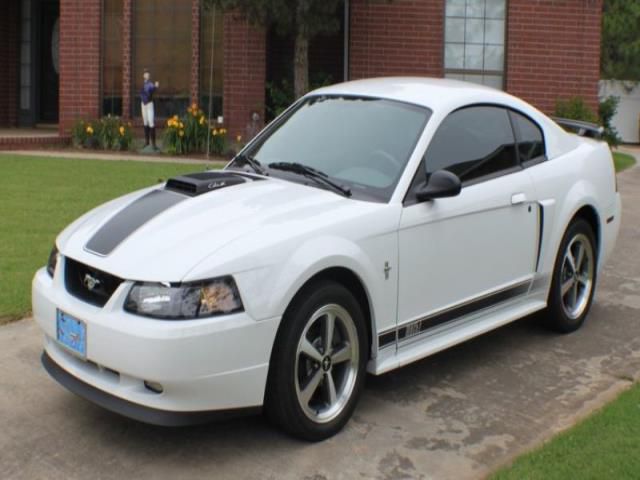 2003 Mustang Mach 1. The Car is Oxford White and is 1 of only 814 built with this Exterior Color in 2003. The production total of 814 cars in this color brakes down as: 586 with Manual Shift Transmissions. 228 with Automatic Transmissions. This car is adult owned and has been Garage kept since new. It has been in the driveway during rain, but has never been driven in rain or bad weather. We have added Window Tint, The Honey Comb Panel Between the Tail Lights, and the “Cobra Jet” Script Lettering to the sides of the Air Scoop. These can all be easily removed to bring the car back to showroom condition without any affect to the body, scoop, or windows. All of the tires (including the spare) were deflated one week after delivery and re-inflated with Nitrogen. This car’s Oil was changed to Royal Purple at 312 miles and has had the oil and filter changed twice a year since. A High Volume K-N Air Filter was installed shortly after we took delivery. The stock air filter will come with the car.
If you have any questions regarding this car, please feel free to contact me : po7roscoechichi@mynet.com