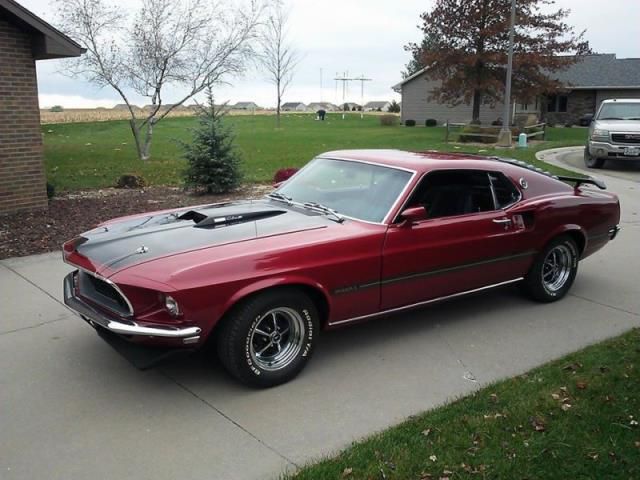 1969 Mach 1 Big Block 428 Ford Mustang Cobra Jet for sale. I have the Marti report and pictures of the door VIN number and the engine number. I also have links to the videos on youtube of the underside of the car as well as the car in action. THIS IS AN ORIGINAL 428 BIG BLOCK COBRA JET ENGINE. This has a clear title, and has been restored in 2006-2008 (interior, new crank, headers, and exhaust). This car was purchased from California in 2006 and has no rust and has never been in the rain - I have had this car stored from the elements in a secured garage and under a cover in between use. The exhaust specialist said that the underside of the car is a "9 out of 10" when we had it hoisted last week. The transmission is the original manual transmission. The interior is new in 2006 (original mustang interior) and is black and red with black carpet. The odometer reads 88,534 but has had an engine rebuild and only 1800 miles have been put on after engine rebuild. All of the glass is in excellent condition. VIN 9F02Q139130. There are blemishes on the paint, I have detailed pictures of that and a diagram, contact me for that to see the chips and blemishes. Things that could be done:-The emergency brake is broken and needs to be replaced but that is a minor cost. -The exhaust needs to be adjusted and that will run 150.00-200.00 depending on your location. -The rear springs are the original springs and could be replaced, this will run 300.00 Otherwise, this car lights up in seconds! Serious buyers ask me for videos and I will send you the link. Please see the details below to determine what has been done to the car: In 2006 -Ford Edelbrook Int Manifold -HP FEL PRO INT gasket set -428 Ford Water Pump -428 Ford Forged Pistons -Balance 428 Ford Engine Complete -428 Ford Center Force Clutch Set -M57HV Melling Oil Pump -IS60 Melling Pump Drive Also Rebuilt original Big Block engine new Ford crank (700.00) bigger carburetor new header new spoiler on back window new spoiler on trunk lid transmission redone because crank was bad new aluminum radiator for cooling VIN DETAILS Body: Mustang Dual headlamps were introduced in 1969, with the extra pair set into the outer area of the grille. The corralled grille pony was replaced with the pony and tribars logo, set off-center to the drivers side. The wheelbase remained 108 inches, but the overall length increased by almost 4 inches, and the width increased by almost half an inch. Coupes, fastbacks, and convertibles were still offered, but new models joined the lineup: Mach 1, Boss, and Grandé. All of these models took their toll on GT sales; they were continued in 1970, but the GT was not. Only about 50 Mustang Es were produced. They were economy cars with a 250ci six cylinder engine, automatic transmission with a special torque converter, and a low 2.33:1 rear axle ratio. They were all sportsroofs, and had Mustang 'E' lettering on the rear quarters. The 351cid V-8 was introduced in 1969, and was available with 250 or 290 hp. For those wanting more power, the 335-hp 428cid Cobra Jet V-8 big block was available with or without Ram-Air. More than 80 percent of Mustangs in 1969 had V-8 engines. The Mach 1 was essentially a fastback GT with different stripes and a more upscale interior. A spoiler and rear window louvers were optional. The Mach 1 included the GT's non-functional hood scoop. A functional "Shaker" scoop was available. It was mounted on top of a special air cleaner and protruded though the hood. A vacuum-operated door opened when the throttle was floored, allowing cool air into the carburetor. The scoop was standard on the 428 Cobra Jet Ram-Air V-8 and optional for Mach 1 or GT with 351 or 390 engines. The stripe package was reflective. A flat black rear spoiler was not an option early, but became available late in the model year. Engine: 8 Cyl. 428 CID The 428 Cobra Jet, launched in April 1968, was a version of the 428 FE engine built for performance rather than cruising smoothness. Not a true racing engine, but it was sufficient for street use or amateur drag racing. The 428 Cobra Jet could be made on a regular production line, not requiring the exacting tolerances required by the 427. The 428 Cobra Jet has greater low-end torque than the 427, thanks to its longer stroke. The Cobra Jet used a beefed-up version of the 428 block with an extra main bearing webbing and thicker main caps than the standard block. The engine was underrated at 335 hp (250 kW) at 5200 rpm. The 428 Cobra Jet actually produced 400 to 410 hp (299-306 kW).