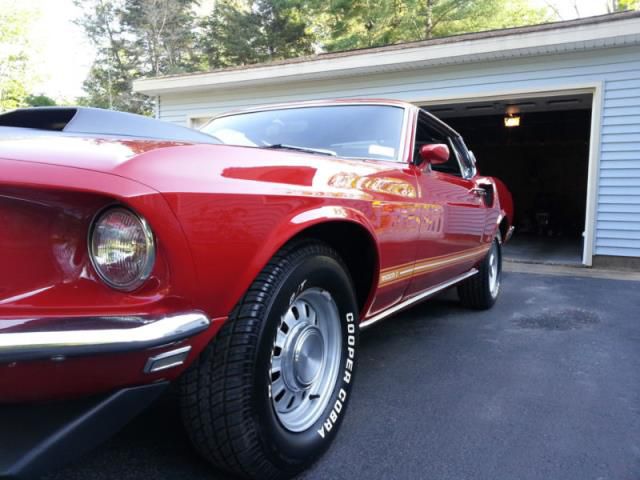 Up for sale is a 1969 Ford Mustang Mach 1 Q Code 428 4 Speed Cobra Jet. As we all know the 1969 Mustang Mach 1 is a legend in muscle car history. This particular car maintains many of its original parts and is extremely solid as you can tell from the photos. VIN BREAKDOWN: 9T02Q171958 9 - 1969 T - Built at Metuchen 02- Mustang 2-Door Sportsroof Q - 428-4V Cobra Jet Non-Ram Air Engine 171958 - Serial Number Door Plate Information: 63C - Mustang Mach 1 2-Door Sportsroof T5 - Candy Apple Red Paint with black-out hood treatment 3A - Black Clarion Knit/Vinyl Mach 1 Hi-Back Bucket Seats 06B - Buffalo Ordering District S - 3.50 Traction-Lok Rear Axle 6 - Four-Speed Close Ratio Manual Transmission This Mach 1 is a Marti Report confirmed original Q Code vehicle and it is equipped with its original, matching number, VIN stamped (9T171958), 428 Cobra Jet engine. It has the correct RUG-AE2 4 Speed Toploader Manual Transmission and 3.50 Traction-Lok Rear Axle. It is painted in the correct Candy Apple Red exterior paint with the black-out hood treatment. It has the black knit interior, which is in very nice shape. The original Philco AM Radio is present and works properly. The dash pad has recently been replaced with a new Ford Tooling dash pad and is perfect. All the gauges work properly. The odometer reads 14,297. It is believed to be 114,297 on the body but all the driving components are new or refurbished. The Cobra Jet engine has been professionally rebuilt within the last two months. The cylinders have been bored .040 over and new cast iron pistons have been installed. The original Cobra Jet Heads have been rebuilt. All the seals and gaskets have been replaced and the water pump has been rebuilt. It has a new power steering unit and all four shocks have been replaced. The correct C9AF-9510-M List 4279 Holley Carburetor has been refinished, rebuilt, and professionally tuned to the stock settings. The Q Code Air Cleaner Assembly was sent out to Semo Mustang and professionally refurbished by Jeff Sneathen. The tires are like new and have less than 500 miles on them. The original Space Saver Spare is still present in the trunk with the original, unused, compressed air can. This is a three-owner car. According to the Deluxe Marti Report (which will be included with the sale) this Mustang is 1 of 9 with the options it possesses. The gentleman I bought it from had the car passed down to him by his father who bought it from the original owner. According to the gentleman’s father the original owner bought the car in February of 1969. He brought the car in for a service later that year and the dealership had a Boss 429 on the sales floor. The original owner loved the hood style of the boss 429 and within the next few years he replaced the original Q Code hood with a Boss 429 hood. When I purchased the car I originally had planned on putting the original hood back on the car because the car has so many original parts. After working on the car and seeing how nice the Boss 429 hood looked and how well it was painted I decided to keep the hood on the car as a nod to the original owner’s style. Being that both hood scoops are non-functional as there is no Ram Air set up on the Q Code model I decided to leave well enough alone. I took the time as I was restoring the engine bay and rebuilding the motor to photograph all the numbers and date codes on the engine parts to document the motors originality. As you can tell from the date codes the Engine / Heads / Intake they were all manufactured within 10 days of each other in January of 1969. As stated earlier the partial VIN number is stamped on the back of the block and it is also present on the driver’s side head (the stamping is very faint on the head but it is there). The body and paint on this car is very nice. The paint has some very minor flaws that are consistent with any vehicle that is driven and not treated like a trailer queen. It is easily an 8 out of 10 paint job and this car will turn heads anywhere you go. The current average market on these 1969 Mach 1 428 Cobra Jets is approximately $52,000 according to Hagerty, which is based on current auction results that have been obtained over the past few months.