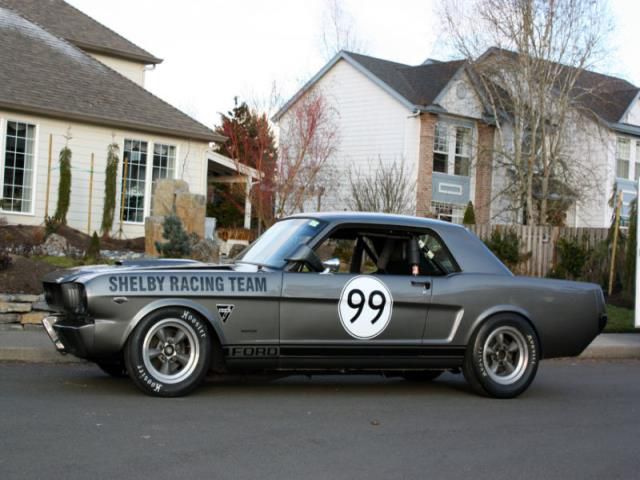 In 1966, the Sports Car Club of America announced it would recognize sedans as a National Championship category for the first time. The professional series, called the Trans-American Sedan Championship (the "Trans-Am" for short) was to be made up of seven professional races at road circuits across the United States. Naturally, Shelby American was asked to develop the Mustang into a Group II sedan racer. Shelby American's Competition Director, Lew Spencer, sat down with Ford's SamSmith, Shelby American's Marketing Director George Merwin and Chuck Cantwell, Shelby's GT350 Project Engineer. The subject was FIA Group I and II Sedans, and how Shelby American would build them. It was decided that the cars would be purchased by Shelby American from Ford, on a D.S.O. basis, and sold by Shelby; however, they would be considered Ford products and would carry Ford Serial Numbers. An initial batch of Group II cars would be built in the Competition Department, reworked in a manner similar to the GT350 competition model. The Mustang Group II sedan and GT350 R-Model were mechanically identical. All of the notchbacks were ordered in Wimbledon White with black interiors, 271 Horsepower 4V 289 engines, four speed transmissions and 3.89 rear axle ratios with Detroit Locker "No-Spin" units. They also came equipped with 15" x 6" steel wheels, front disc brakes, adjustable "export" shock absorbers, export front end brace, heavy duty front springs and GT fog lamps. All cars carried the Ford VIN prefix 6R07K. Once the cars arrived at Shelby American they received virtually all of the R-Model mechanical parts and modifications. The suspension was essentially brought up to 1965 Shelby specs: A-arms were lowered one inch; a one-inch front sway bar and Monte Carlo bar were added along with the GT350 Pitman and idler arms. Over-ride traction bars were installed at the rear. Sixteen Group II cars were built and sold during the 1966 model year. Despite their small numbers, the Shelby Group II Mustangs earned points for Ford in five out of the seven Trans-Am races in 1966. This faithful Tribute of a vintage correct K-Code SCCA Group II racer boasts this heritage with bravado. The following list details these Shelby inspired enhancements as well as modern acceptable safety and performance upgrades. Please feel free to contact Dave with questions:503 805-4729Here's a short Youtube clip:https://youtu.be/ECMx3O05TX8 K-Code Coupe built for Vintage Open-track racing - Vin #: 5F07K366980 *302 hipo Mexican service block-bored .0030” over (original K-code Block available)