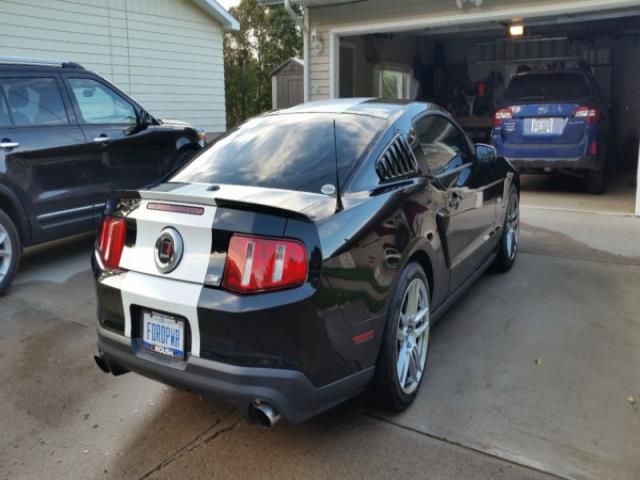 2011 Mustang GT Premium. This is not a Roush edition. I did not like the Roush ride, suspension or tune. I decided to customize what I liked from Roush. I visited their shop and spoke with some of the folks there. Very good condition. No accidents or body work. Factory Options: - Brembo edition. 14 inch 4 piston front brakes- Power drivers and passengers seats (rare option)- 6 Speed manual transmission- 3.73 rear end gear ratio (same axle as GT500)- Sirius radio with shaker 500 Aftermarket equipment: - Roush TVS2300 supercharger. This is an intercooled SC with fuel delivery upgrade. Fairly large intercooler installed in front of the radiator with Ford Racing intercooler pump. Does not get heat sink like a GT500. Google Brenspeed for their Corvette Killer. Makes 591RWHP, 488 RWTQ on 93 octane gas. 47lb injectors. Max safe tune which gets 23mpg at 78mph and 24.5 at 62mph.- Carbon fiber one piece drive shaft.- Boss 302 oil cooler. This is to keep the engine safe!- BMR safety loop.- BMR lower control arm relocation brackets.- Whiteline lower control arms.- BMR watts link. You can see this from the undercarriage photo. This device gives the car flat handling that a rear sway bar cannot without the harsh ride.- Energy suspension shifter bushing. No additional noise and quick, firm shifts.- Tokico D-spec shocks, struts, Ford racing P springs. Drop is about 1 inch. Tokicos allow adjustment from super firm to super soft. Note the remote adjusters in the trunk so you do not have the lift the liner. I have the key on my keychain to adjust.- GT500 axle backs. Provide very cool sound with zero drone.- Exedy 500 clutch, pressure plate, throwout bearing. Allows for no slippage if you ran slicks (which I never have). About 25% firmer pedal than stock. The original clutch never slipped, but I didnt want to do these modifications half way.- Gauge pods. The top is the Aeroforce interceptor, then oil temperature sensor, boost gauge. Max boost is about 10psi.- Striping is my own design which I get compliments on very frequently.- Pirelli all seasons P Zero Nero. 245s front and 275s rear. Nearly new. Great grip in wet or cooler temps with Boss 302 LS knockoff wheels which have TPMS installed.- Nitto Drag radials mounted on 18 x 10 wheels rear and 18 x 9 front. The fronts have Nitto 555 Extreme tires. Very low miles. Mounted on drift wheels from American Muscle. Have TPMS sensors installed. These are basically new and are included in the auction.- SCT tuner. Tuned by Brenspeed in Indiana.- Retrofit HID projector bi-xenon 55 watt headlights. I modified these myself. Took hours to install the lens. I also have the factory lights.- Pioneer upgraded speakers in doors and rear panel.- Lloyds custom floor mats. This car is about a 95/100. A few scratches, etc.