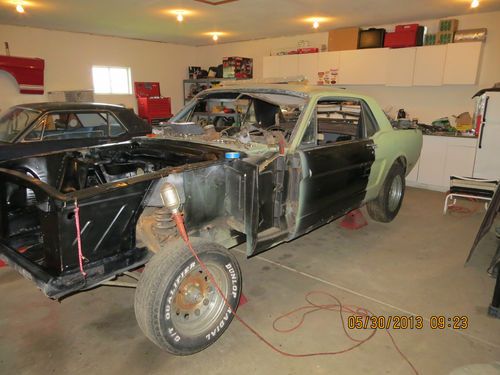 I have a project that I don't have time for right now and we are planning on selling house this summer. I really don't want to rent storage units for it. I have a ton of money invested in it already, and plan on taking a loss. this is for sale as a package so please don't ask to buy certain parts. I will not sell indivual items seperatley. I bought the car from some one who had started on it. It has new floor pans, ( although the drivers side was an inch to short and will need a piece welded in ). has new radiator support, and new inner fender aprons, the frame rails are solid, as is trunk floor. no rust around windows, doors are solid but some one scratched there name in them should sand down, has all glass windshield has wiper scratch in it, I have a nice pair of fenders for it . It is a four lug, 6cyl. car. I was planning on a V-8 conversion and have almost everything to go with it.  IT HAS A CLEAR TITLE IN MY NAME. also included is 5 lug rear end, a v-8 engine with transmission,  Also included is a 66 mustang sprint. the car is complete. but has no title. I bought it for parts has some nice trim parts, chrome, etc. also included are the parts I bought new, I will list as many as I can remember.. from mustang unlimited, upper & lower A-frames, all steering linkage, coil springs, brakes,brake drums,wheel cylinders, springs, and pre bent lines. and master cylinder,..fuel line tank to front, complete interior in black including carpet headliner door panels seat upholstery, kick panels, arm rest, and dash pad. also have the front and rear window rubber. ALL NEW AND STILL IN THE BOXES  ALL FOR A V-8.  I also have from Mr. mustang all new wiring, complete under dash harness, and from parking lite to tail lite, and the engine harness as well, I also bought some misc. parts for the engine was planning on going through it as well was told it ran but wouldn't put it in with out going through it first, have complete gasket kit water pump, timing gear set, oil pump. also have a set of chrome headers for car ALL NEW.  also have a set of B F Goodrich T A radials mounted on new rims, that are NOT included but will sell to winner for an extra 500.00. Im sure there will be a ton of Questions, and im sure I have parts I forgot to list. but its all included... shipping will be difficult because of everything that is included. I can load most parts in the 2 cars but the engine and rear end, will be a problem for most shipping companys.  I recommend 2 trucks with 2 car trailers.

THIS AUCTION IS FOR BOTH CARS, THE ENGINE, THE REAR END, ALL THE PARTS !!!!  TIRES & WHEELS ARE NOT INCLUDED BUT CAN BE PURCHASED FOR AN  EXTRA 500.00  BY WINNER ONLY

also YES I do have the 5 lug front spindles to go with it, also have a new in the box aluminum intake (weiand) for the engine

On Jun-01-13 at 14:49:16 PDT, seller added the following information:I'M getting a ton of questions regarding the reserve. I have a lot of money invested in this project. I wasn't building a perfect restoration, I was building a daily driver that I wanted. that's why I bought all the parts to switch to a V-8 car. If it dosent sell I will store it till I have time to get to it. THE RESERVE IS UNDER 5000.00