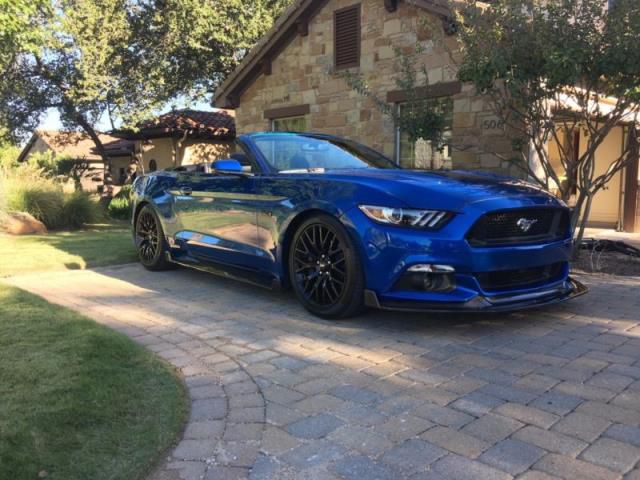 Please contact me only at : jamesykid2@aol.com For sale is my Hennessey HPE750 Mustang Convertible #21 of #50. I ordered thestock car straight from Ford so it started as a GT Premium Convertible with theMustang Performance Pack which added the following:•Brembo Brakes •GaugePack•Heavy Duty Front Springs •K-Brace•Larger Chassis Tuning •Upsized Rear Sway Bar•Unique StabilityControl, EPAS, & ABS Tuning•TORSEN Differential with 3.73 GearsOnce itarrived, the dealer installed window tint, Data Dot theft protection, and thePassport 9500 CI radar dector:Check it out at all thiswas done, it was sent to Hennessey for the HPE750 Package with 1" loweringSprings and CarbonAero kit ($31,000 with tax): Power •782 bhp @ 7,000 rpm•648 lb-ft tourque Performance •0-60 mph: 3.4 sec •¼ mile: 10.9 @ 133 mphHPE750 Supercharged 5.0L V8 Engine Upgrade •2.9 Liter Supercharger System•Carbon Fiber High Flow Air Induction •Upgraded Fuel Injectors •UpgradedFuel Pump System •Carbon Fiber Coilpack Covers •HPE Engine CarbonAero •CarbonAero Front Splitter •CarbonAero Side Sills•CarbonAero Rear Lip Spoiler The price of the car new was $48000 and at thetime, they were offering a $2000 rebate so I got the car for $46000 plus TTL.Add the tint, Data Dot security, Extended Warranty, and Radar Detector and thatadded $4500 so that puts me at $50,500 plus TTL. It also has a 3M clear bra onthe front and acrylic coating on the rear. That was about $1300 and I have thereceipts and coverage info for that. The Hennessey HPE750 package withCarbonAero kit was $31000 plus tax so I have about $82,300 (plus shitty tax) inthe car. Hennessey has a warranty for 24 months or 24,000 miles. Work wascompleted 4/7/17 so a lot of that warranty will remain. I'll throw in a carcover that has a small tear in it from a move. I don't drive it that muchand it's a shame which is why I'm selling it. It deserves better thenthat!