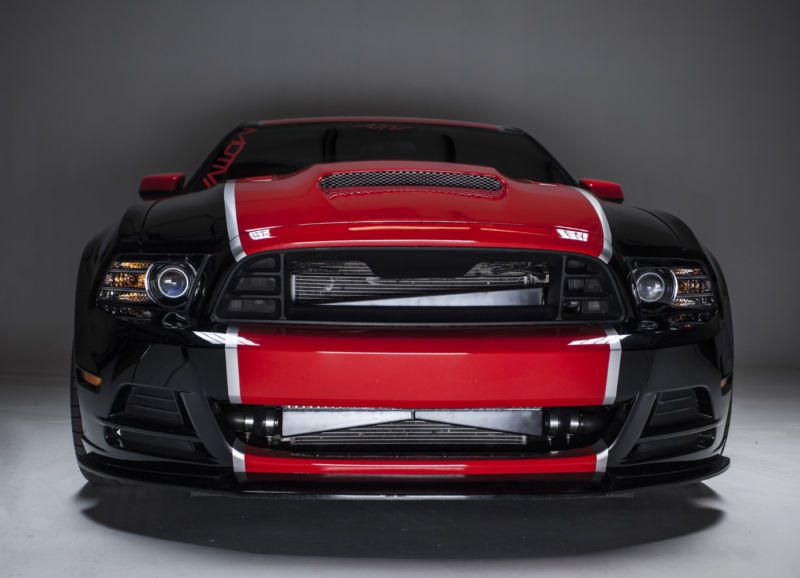 ANY QUESTIONS JUST EMAIL ME: lacylmmatthies@ukpub.net .

Always dreamed of owning a 1000+ Horsepower ride, but couldn’t justify the $1,000,000+ price of admission? Do
you find it ridiculous that every single car you’ve ever owned is laughed at by 1000cc Sport Bikes? Is the cure
to your mid-life crisis really another pedestrian Porsche or Corvette? The answer to the above questions, and many
others, is simply Hellanor.
Hellanor began life as a lowly Mustang GT. The poor car was driven a total of 100 miles before
being completely stripped down and reborn in the image of the most badass mustang conceivable. A complete Shelby
GT350 Widebody conversion and GT500 front fascia was installed before the vehicle was professionally prepped and
painted with the striking wide red stripe with Metallic Silver finishes on the edges.
The seats were removed and recovered in Armageddon branded Katzkin Leather. All interior accent pieces were removed
and professionally painted to match the red scheme throughout the car. A Raxiom shift knob was added along with
some gauges to keep an eye on the engine vitals. But, you’re not reading this just because Hellanor is the
meanest ‘Stang you’ve ever seen. You’re probably wondering about the 1000+ Horsepower.
This vehicle was originally built for the SEMA show and Garrett Turbochargers. Armageddon Turbo Systems was invited
to create the most powerful street-legal mustang for the entire SEMA show. Armageddon is internationally renowned
for producing the highest quality performance products at any price. The entire Armageddon catalog was installed to
Hellanor and boy do the results show it.
After the SEMA show Hellanor was taken on a 5 State cruise to prove this was not all hype. While travel under its
own power this vehicle laid down more than 1000 Horsepower to the rear tires on 5 different independent
dynamometers.
Outside:
Shelby GT350 Wide-Body
Shelby GT500 Front End
Hyperstangs 20" Wheels with 345/30ZR20 in rear and 255/35ZR20 in front
Custom Painted Red Stripe (Race Red) with Silver Accents (Ingot Silver)
Tru-Fiber Functional Hood
Inside:
Boss 302R Gauge Pod
KATZKIN Custom Seats (Front and Back)
Interior Pieces Paint-Matched (Race Red)
Barton Two-Post Shifter
Raxiom Shift Knob with Gear Indicator Armageddon Package: GT1000 Package
Engine:
Boss 302R Intake Manifold
Boss 302 Strut Tower Brace
Armageddon Gulf-Spec Option: Adds Methanol Injection, Wideband o2 Setup, Methanol Flow Gauge and Boost/Methanol
Failsafe (If engine is too lean it cuts boost down to protect itself)
Armageddon 4" Aluminum Driveshaft
McLeod RXT Twin-Disc Clutch
Armageddon MPS 1500 Engine
Armageddon GTX3582R Twin-Turbo Setup (1500 Horsepower Capable)
Boost Pipes and Intercooler Hydro-dipped for Carbon Fiber appearance
Armageddon Triple-Pump Fuel System: Boost referenced activation for cooler fuel temperatures
1300cc Fuel Injectors
GT500 Exhaust with Cut-Outs Installed
CNC Mandrel Bent 14 Gauge 304 Stainless Steel Headers: By Kooks
CNC Mandrel Bent 304 Stainless Steel TiG Welded Downpipes: By Kooks
CNC Mandrel Bent Thick Wall Aluminum Charge Piping: By Kooks
X2 TiAL Sport 44mm MV-R Wastegates (With All Springs): By TiAL Sport
Tial “Q” 50.5MM Blow-Off Valve: By TiAL Sport
Aluminum High-Flow Intercooler: By FLUIDYNE
Custom CNC Low Pressure A/C Line
Stainless Steel Support Bracketry
Pre-Made Turbocharger Plumbing System: By Goodridge Fluid Systems
4-Ply Silicone Coupler Kit with Stainless Steel T-Bolt Clamps: By Vibrant
2x High-Flow Air Filters: By Vibrant
2x Garrett GT3582R Turbochargers (1500 Horsepower Capable)
Remote Tuning and Base Tuning Provided with Every System