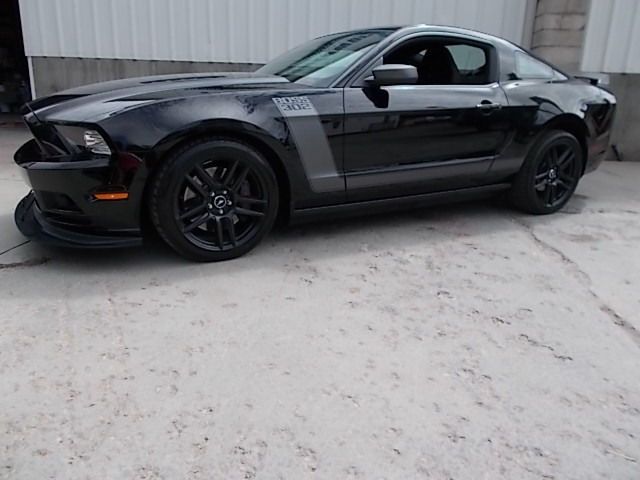 This is a Rare Limited Edition 2013 Ford MUSTANG BOSS 302 LAGUNA SECA. It is number LS 657 and was built 11/2012.
It is finished in Black with low gloss Sterling Gray Boss decals as pictured. This sterling gray also covers the
mirrors and rear spoiler. Charcoal Black Cloth interior with Recaro seats. The Recaro Sport Seats have embroidered
BOSS 302 Logo. The naturally aspirated 302 / 5.0 Liter 4 Cam 4 Valve motor produces 444 Hp and has a 6 Speed Transmission.
Torsen 3.73:1 Ratio Differential. It has both the regular key and the red track key from the factory with Quad
Outlet Side & Rear exhaust. Brembo 4 piston brakes with Ford Racing front brake cooling ducts. The original wheels
were powder coated black for an amazing look. Mounted are performance Pirelli P Zero Corsa 255/40ZR19 on 9" wide
wheels front and 285/35ZR19 on 10" wide wheels in the back. It has the front splitter and large rear spoiler for
increased down force for track use. Independent rear suspension. Revised suspension tuning with unique spring and
damper rates and larger rear stabilizer. Sport-tuned traction and stability control. On the underside, most
original stickers are in place on the sway bars and the exhaust. The Laguna Seca maintains street legality while
bridging the gap between the Boss 302 and the track only 302R and 302S of Ford Motorsport. In other words a street
legal race car. What a beauty!