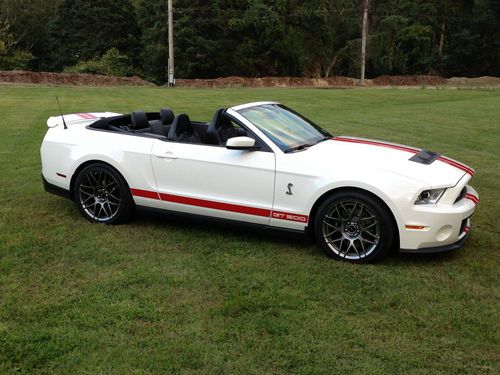 I AM SELLING MY 2012 SHELBY GT500 CONVERTIBLE.  THIS CAR IS IN SHOWROOM CONDITION AND DOES NOT LEAVE THE GARAGE UNLESS THE WEATHER IS PERFECT.  IT WAS CUSTOM ORDERED FROM FORD AND HAS EVERY OPTION THAT THEY OFFER.  THE CAR JUST REACHED 3100 MILES TWO WEEKS AGO AND HAS BEEN COVERED IN THE GARAGE SINCE THEN.  IT IS 100% IN STOCK FORM AND GETS TREATED LIKE A BABY WHEN DRIVEN.  I AM LOOKING TO BUY A HOUSE AND SHE MUST GO.