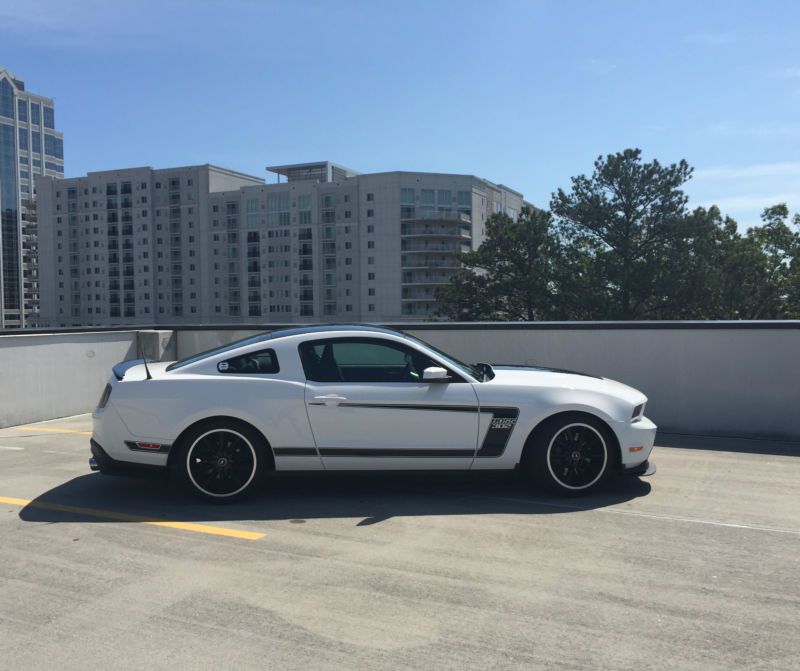 Just email me at: rooseveltraagard@uknuts.com .

2012 Ford Mustang Boss 302 #072. It is a very low production number being one of
the first 100 built. It comes with all the documentation including: Original Window Sticker, Certificate of
Authenticity, Boss 302 Owners packet with numbered and engraved key chain, Boss 302 Car Cover, and Track Key.
It is has every option available on the 2012 Boss 302's including Recaro seats, TORSEN helical differential, Boss
302 car cover and carpeted floor mats.
The Boss has a few upgrades to make it perform even better. I added a MGW shifter for more precise shifts (stock
shifter comes with car), Eibach Sportline lowering springs (stock springs come with car, Ford Racing adjustable
panhard bar (stock panhard bar comes with car) and Spintech mufflers (stock mufflers come with car). All of these
are reversible so if you want to bring it back to factory stock, you can.
This is a low mileage (9,749 miles), early production Boss 302 that comes everything that you would want including
multiple car show trophies, matching MatchBox car, R/C car, as well as other extras.
Boss 302's have some rather unique features such as Track Key and Quad Exhaust.
Track Key - is special software activated by Ford Dealer which puts the car in Track Mode, producing more
horsepower and changing engine characteristics. My car has had the Track Key activated and it's awesome!
Quad Exhaust - the exhaust system has exhaust tips that exit prior to the rear wheels are can be adjusted using
baffle plates. My baffles are removed but are included in case you don't like it loud. It sounds great to me!
Modern Boss 302's are modeled after the original 1969 - 1970 Boss 302's with Stripes that mirrored those years. The
2012's looking like 1969's and 2013's, the 1970's.
Car & Driver tested the cars and their testing numbers were:
60 mph in 4.2 seconds
Quarter-mile in 12.7 seconds at 114 mph
Top speed of 161 mph
0.96 g of cornering grip
This is a great car that always turns heads and gets thumbs up as you drive down the road. You will get all of the
extras including the two 1st place trophies that it won.
I would be happy to pick you up at Norfolk International Airport (ORF) if you want to fly in and drive it home. If
you would like to get it shipped, I will work with your shipper to get the car loaded.