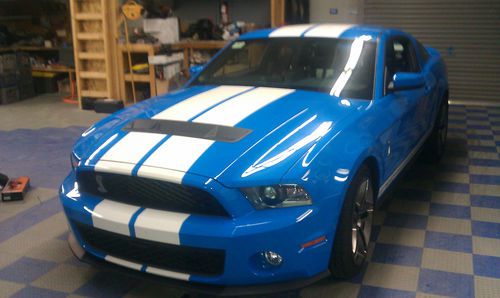 This is a very special GT 500. In 2011, only 4150 coupes were built. This is number 4127. Only 171 were made in Grabber blue, and this is the 169th of the run. But, what makes this car really special is that the passenger air bag cover is autographed by Carroll Shelby himself! The car is in show room condition and has approximately 28,000 miles. It has a custom exhaust with Borla resinators. After being pulled over a couple of times, I installed a K40 radar detector. This detector will actually scramble the new laser that many police departments are now using preventing them from getting a reading. I have also installed a Viper alarm system that can be activated by your cell phone. This car is priced to sell, and now that Carroll Shelby has passed, the value of the car is sure to increase over time.